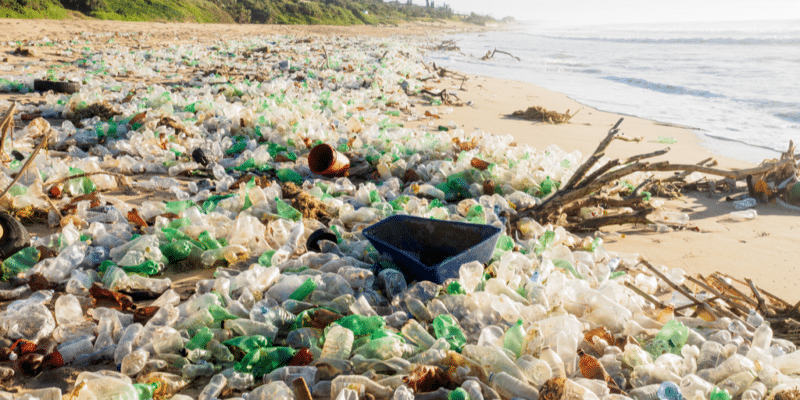 Lighthouse beach, located in the city of Lagos in Nigeria, is a shadow of its former self. The cause of this chaos is plastic waste pollution, as well as the abandonment of shipwrecks by sailors. A recent initiative to collect 230 bags of plastic waste from the Nigerian beach is the latest in a series of initiatives, but will it be enough to restore the area to its former glory?

Lighthouse beach has had some of its plastic waste removed. The clean-up of the largest beach in Lagos, Nigeria, was carried out as part of a collective action led by Nigerian citizen Owoade Yussuf.

A total of 230 large bags of plastic waste were collected at Lighthouse beach by a dozen volunteers. According to the team leader Owoade Yussuf, the collected waste will be sold at 500 dollars per ton. Plastic recycling could therefore bring in $250 million for the city of Lagos in less than a year. The city of 20 million people produces between 13,000 tonnes and 15,000 tonnes of rubbish a day, including 2,250 tonnes of plastic, according to local company WeCyclers.

“We’ll be back in June 2021 with more than 100 volunteers,” says Owoade Yussuf, who initiated the rubbish collection on Lighthouse Beach, a nine-kilometre stretch of sand facing southeast towards Lake Cathie. In addition to plastic waste, the beach is polluted by boat wrecks abandoned by sailors.

The urgent need to raise awareness

The high concentration of plastic waste at Lighthouse Beach, which links Lagos to Benin for more than 100 kilometres, has serious consequences for human health and the environment. If nothing is done, the people of Lagos could find themselves in the same situation as those in Tunisia, where swimming has been banned at 23 beaches since June 2020 due to pollution.

The final solution to the plastic pollution problem in Lagos will come from the people. For example, Owoade Yussuf believes that local communities need to be reminded of the benefits of keeping their environment clean. People should also be involved in daily, weekly or monthly sanitation projects.

Eradicating pollution in Lagos and other Nigerian cities will also require strict compliance with the Plastic Waste Act, which was enacted in October 2020 by the Nigerian government. Among other things, the legislation promotes the development of a circular economy around plastics in a country that generates some 32 million tonnes of waste per year, including 2.5 million tonnes of plastic waste.