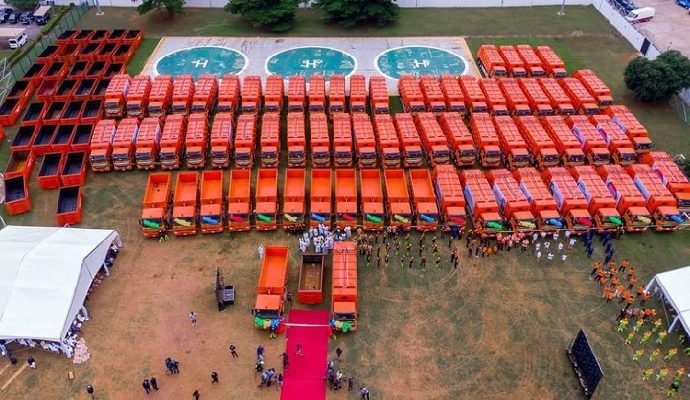 The Lagos Waste Management Authority (Lawma) is improving its performance with new equipment. This includes 102 trucks for the collection and transportation of solid waste in Lagos State, Nigeria. The government agency has also acquired 100 double bins for selective waste separation.

Lagos, Nigeria’s most populous state with some 20 million inhabitants is also among the most polluted. According to the Lagos Waste Management Authority (Lawma), the south-western state produces about 13,000 tonnes of waste per day. This waste is poorly managed due to lack of adequate facilities.

To improve waste management in Lagos State, Lawma recently acquired 102 trucks. “These vehicles include 30 compactor trucks with a capacity of 12 m3 each, 60 others with a capacity of 24 m3 each and 12 hook loaders,” says Babajide Sanwo-Olu, the Lagos State governor. In addition to this fleet of vehicles, there are 100 double bins for selective waste separation.

Towards energy recovery of waste

The new equipment for waste collection and transport in Lagos was designed and assembled locally, while the bins were manufactured by Lawma’s engineering department. They will be distributed to the company’s formations and operational districts across the 57 development areas of the Lagos Local Government Waste Management Board.

The waste collected from across the state is dumped at Olusosun, a 27-year-old site in Ojota, a district of Lagos. The Lagos Waste Management Authority plans to convert the waste into electricity in the near future. “We will intensify our efforts to convert waste into electricity. Over 6,000 formal and informal workers have already been employed through our Lagos Recycle initiative, which has had a positive impact on waste management in the state,” says Ibrahim Odumboni, Lawma’s managing director. This other project is expected to help strengthen the power grid in Lagos State.