Homepage » NAMIBIA: Key points of the ‘strategic’ partnership with the EU on hydrogen 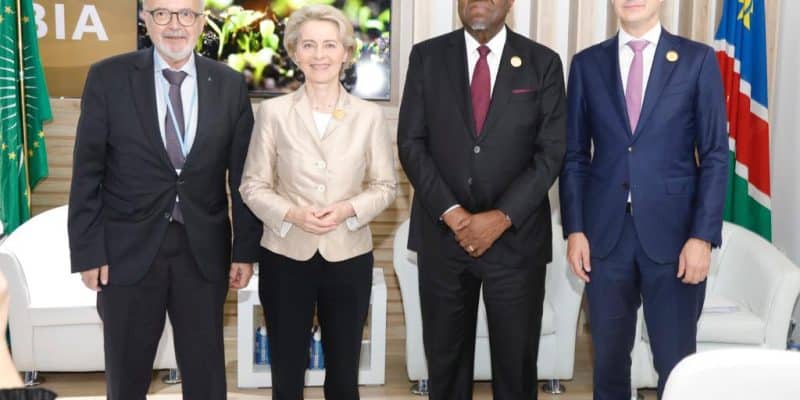 The Namibian authorities have just signed a "strategic" partnership with the European Union (EU) on raw materials and green hydrogen. The EU is banking on this energy for the decarbonisation of its industry. Namibia, which has enormous potential for clean energy production, is expected to help.

The European Union (EU) is counting on Namibia to supply it with low-carbon hydrogen over the next few years. This is the aim of a partnership signed on the sidelines of the recently concluded 27th United Nations Conference of the Parties on Climate Change (COP27) in Sharm el-Sheikh, Egypt. The agreement was signed by Namibia’s Head of State Hage Geingob and European Commission President Ursula von der Leyen.

The partnership covers the joint development of the green hydrogen industry and other raw materials. With an arid climate, Namibia is also very sunny. This natural potential can enable large-scale production of the solar energy needed to produce low-carbon hydrogen. The EU is banking on this energy to decarbonise its industry and eventually replace Russian gas. Under the agreement, the organisation says it is ready to provide loans of €500 million for the production of green hydrogen in Namibia.

This financing, which will be provided through the European Investment Bank (EIB), will be accompanied by a grant of €5 million. “Green hydrogen will play a special role here. Not only will it form the basis for Namibia’s industrialisation and a potential cornerstone for the development of a sustainable export economy, but it will also provide much needed energy to the region. In addition, Namibia’s green hydrogen could also play a crucial role in helping Europe achieve carbon neutrality,” says the EIB.

These investments will mainly support European companies that are already active in the green hydrogen market in Namibia. This is the case of Hyphen Hydrogen Energy. The joint venture between the German energy company Enertrag and the investor Nicholas Holdings wants to invest 9.4 billion dollars in green hydrogen. The first part of this investment, $4.4 billion, will develop 2,000 MW of clean energy capacity. The electricity will be generated from solar and wind power plants in the Tsau/Khaeb national park on the coast in southwestern Namibia. The joint venture then aims to increase its smelting capacity to 5 000 MW by 2030.

Cooperation in research and innovation

Hydrogène de France (HDF Energy) will use EIB funding to build Namibia’s first green hydrogen power plant. In this project, hydrogen will be produced and used as an alternative to reduce the intermittency associated with the production of solar photovoltaic energy. In addition to financing the green hydrogen, the EU and Namibia will work together to promote and facilitate trade and investment links.

Also, the two partners will cooperate in training and capacity building in the green hydrogen value chain, as well as certification. The partnership also covers research and technological innovation. This is a prerequisite for the development and cost reduction of green hydrogen production.