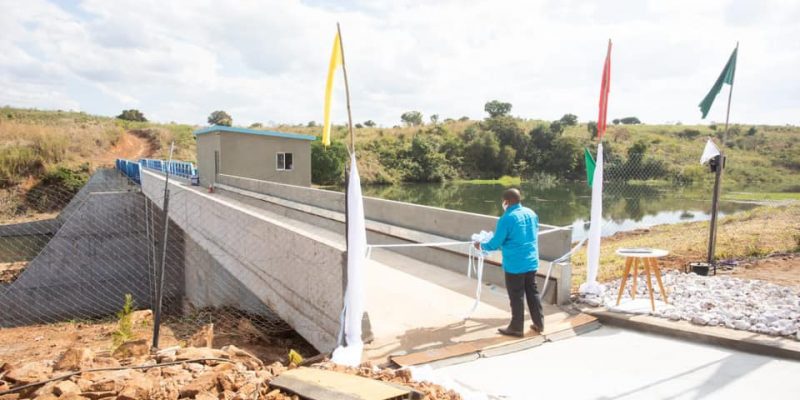 New drinking water supply and irrigation facilities were commissioned on August 4th, 2021 by the President of the Republic of Mozambique, Filipe Nyusi. These include the Gorongosa Dam built on the Nhandar River in the central province of Sofala.

The Government of Mozambique is making progress in the implementation of the Water for Life Programme (Pravida), launched in October 2018. Mozambican President Filipe Nyusi recently inaugurated new drinking water supply facilities in Sofala province. Among the facilities is the Gorongosa water reservoir.

The new irrigation dam is built on the Nhandar River. The dam has a storage capacity of 300,000 m3. “The stored water will increase the current coverage in Sofala province from 22,000 to over 40,000 people,” says President Filipe Nyusi. The water will be used for irrigation of agricultural land, aquaculture, as well as electricity generation.

The Gorongosa dam required an investment of 327 million Mozambican meticais, about US$ 5.15 million. The funding was provided by the Government of Mozambique, which also inaugurated drinking water supply systems in the districts of Cheringoma and Maringue in Sofala on August 4th, 2021.

In the Cheringoma district, the Inhaminga drinking water supply system consists of six reservoirs with a combined capacity of 1,600 m3, a 57 km distribution network and 10 standpipes for the supply of drinking water to 25,000 people. The cost of the project is USD 1.94 million.

The Maringue drinking water supply system serves 19,000 people. At least four boreholes equipped with pumps supply tanks that can store 270 m3 of water. The Mozambican government has allocated more than US$1.05 million to the project. A total of 4.8 billion Mozambican meticais (about $67 million) has already been allocated to Pravida. The programme aims to build an infrastructure network capable of producing 1.2 million m3 of drinking water for more than one million people in several regions of Mozambique.