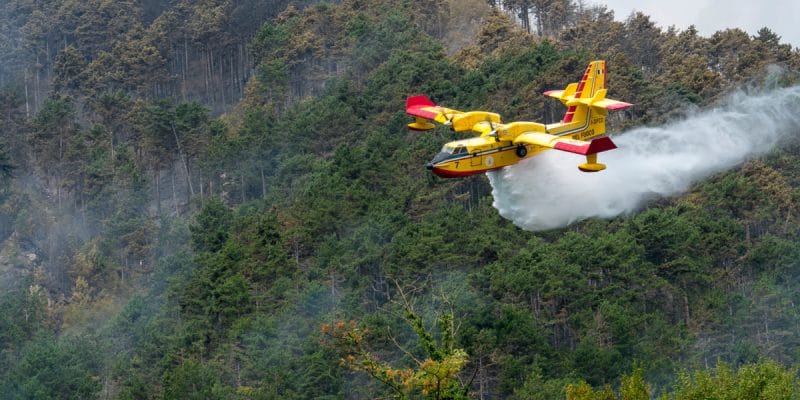 Morocco is finalizing the purchase of three new Canadair CL-415s. These water bomber aircraft manufactured in Canada by Bombardier Aerospace will be delivered in early 2022. They will bring the Moroccan Canadair fleet to 8 aircraft, for a better fight against forest fires, exacerbated by climate change.

The Moroccan Canadair fleet will increase from 5 to 8 aircraft in the first quarter of 2022. It is during this period, which comes before the critical summer drought, that the three new Canadairs that the Kingdom of Morocco has just bought will be delivered. The price of one of these aircraft varies between 20 and 25 million euros. Their purchase was finalized after several successful tests, the last of which took place on October 22nd, 2021.

The Canadair CL-415, also known as the Superscooper and Bombardier 415 by its manufacturer (Canadian Bombardier Aerospace), is an amphibious water bomber aircraft specialized in fighting forest fires.

Morocco remains the only African country with Canadair aircraft. The reinforcement of its fleet aims to improve the quality of its interventions against forest fires on its soil, as well as in friendly countries, as part of its diplomatic action.

Morocco is regularly the scene of bush fires. The latest one occurred on August 14th, 2021 in Chefchaouen, in the north of the kingdom. Some 725 hectares of forest were burned in three days. According to Moroccan authorities, high temperatures (up to 49 °c) and winds would be the main causes of this fire. A previous heat wave, recorded by the Moroccan Department of Water and Forests, between July 9 and 11, 2021, had already caused 20 fire starts in the kingdom, burning 1200 hectares of forests.