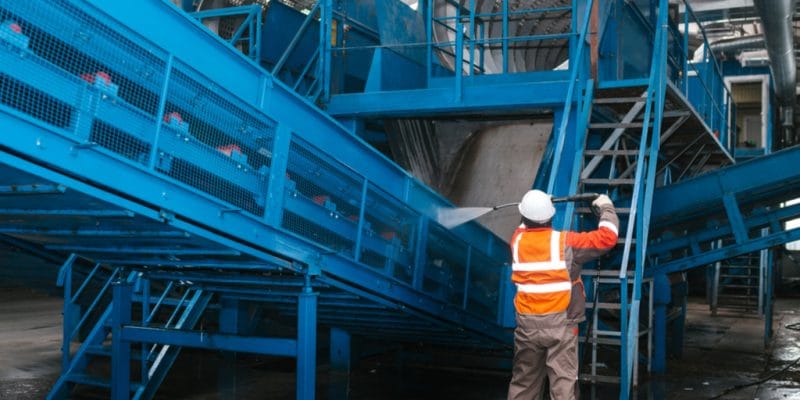 The Moroccan group Ozone Environnement et Services has recently inaugurated a waste sorting and recovery centre near Fez in north-western Morocco. The facility will handle between 300 and 600 tonnes of household waste per day.

The Ivorian Minister of Sanitation and Hygiene was eager to make the trip for Ain Baïda. Anne Désirée Ouloto was in the municipality near Fez in north-west Morocco for the inauguration of a waste sorting centre. It was built by the Moroccan group Ozone Environnement et Services, the waste manager in Fez, a city of more than 1.2 million inhabitants. It collects 1,200 tonnes of waste per day on site. Would Anne Désirée Ouloto like to build a sorting unit in Côte d’Ivoire? Nothing could be less certain. Nevertheless, Ozone already manages waste in several coastal cities in this West African country.

The Ain Baïda sorting centre required an investment of 54 million dirhams, or more than 5.3 million euros. It has a sorting capacity of 30B0 tonnes per day, which can be extended to 600 tonnes.

A system inspired by German technology

The Ain Baïda plant is the result of a contract between the city of Fez and the Ozone group, worth MAD150 million, or more than €13.8 million. BMCE, a Moroccan commercial bank, supported the project. “This unit, which works according to a semi-automatic process, based on German technology, carries out mechanically sorting of the collected waste, then carries out manual refining by specially trained sorters,” explains Aziz El Badraoui, President and CEO of the Ozone Environment and Services group. Without revealing the company’s name, Aziz El Badraoui believes that German professionals have provided, “efficient and quality processing tools”.

The plant was built on 6 hectares and is expected to employ 50 people directly, including 32 rag pickers who still need to be trained in new sorting techniques, and 200 others indirectly. The semi-automatic unit consists of a storage area, a plastic shredder, a plastic washing basin, sanitary blocks, an administrative block and an electrical transformer station, a sorting unit, security stations and parking lots. All this should make it possible to recover more than 28% of the sorted waste.

A project under the National Household Waste Programme which should make it possible, among other things, to build landfill and recovery centres for all cities by 2020, or to develop the “sorting-recycling-recovery” sector, with pilot sorting actions, to achieve a 20% recycling rate in two years.