Homepage » MOROCCO/MAURITANIA: how solar and wind power are making a leap in electricity mixes 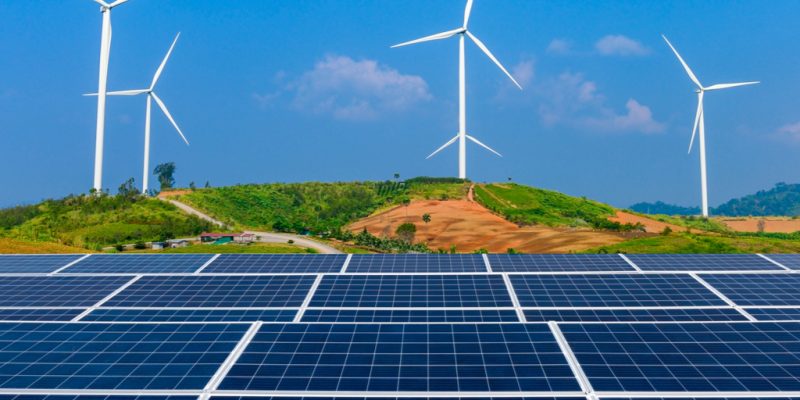 The production and consumption of solar and wind energy is increasing worldwide. It is the main point of a recent report by the Ember think tank. While Denmark tops the list with 55 per cent of its electricity generated from solar and wind power in 2019, Africa is also making progress in exploiting these clean energy sources.

Thus, according to the Ember think tank, 24% of the electricity consumed in Mauritania will be produced from solar and wind power in 2019. This North African country has an installed electrical capacity of 486 MW. Solar energy plays an important role in the electricity mix with many power plants installed in the country.

Among the African countries that are increasing their investment in solar and wind power tenfold is Morocco, which generates about 17 percent of its electricity from these renewable sources. The kingdom has thus embarked on the production of thermodynamic and photovoltaic solar energy with large installations such as Noor, which is still under development and already provides 160 MW (Noor I) of electricity. The kingdom also has numerous wind farms. Ember ranks Kenya 3rd in Africa with 8% of electricity produced from solar and wind power. It is followed by Ethiopia (6%), Egypt (4%) and South Africa (4%). 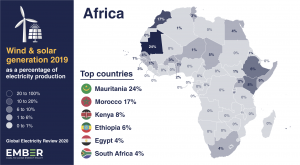 “Countries need to ensure that funds are no longer invested in coal or gas-fired power generation to accelerate the transition from coal to clean electricity,” says Dave Jones, senior analyst on coal to clean energy at Ember.

Mauritania’s largest photovoltaic solar power plant is located in Toujounine, in the north of the capital Nouakchott, with a capacity of 50 MWp. Other installations are located in Atar, Zouérat and also near Nouakchott. As far as wind power is concerned, the country has a wind farm near the capital and in Nouadhibou. Also, a 100 MW wind farm is under construction in Boulenouar, between Nouakchott and Nouadhibou, and is expected to be operational by the end of 2020.

Several countries could hop up in a future ranking

Overall, Ember points out that the energy superpowers of China, India and the United States produced just more wind and solar power in 2019 than the world average (9%, 8% and 10% respectively). Countries on all continents led the way in renewable energy, including Uruguay (38 per cent), Honduras (18 per cent) and Australia (15 per cent).

However, several African countries may be ranked differently in the next Ember think tank report. Egypt, for example, where investments by independent power producers (IPPs) are multiplying in solar and wind energy. The North African country is developing one of the largest solar photovoltaic projects in the world, with an expected capacity of 1,650 MWp (Benban). Wind power is also expected to make a leap forward in the coming years thanks to projects currently being developed by IPPs in the Gulf of Suez.