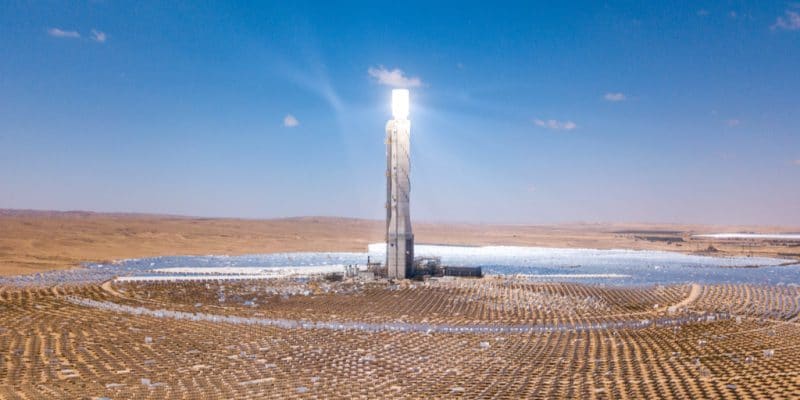 The European Bank for Reconstruction and Development (EBRD) has granted a €45 million loan for the construction of the Noor Midelt I hybrid solar power plant. It will have a capacity of 800 MW.

New funds have recently been allocated to the development of the Noor Midelt I hybrid solar project in central Morocco. It is a €45 million loan from the European Bank for Reconstruction and Development (EBRD). According to official sources, it is Abu Dhabi Future Energy Company (Masdar), one of the members of the consortium in charge of developing the project, which guarantees the EBRD’s loan. It owns 30% of the project.

The other members of the consortium are: EDF Renouvelables, a subsidiary of Électricité de France (EDF) which owns 35% of the project and the Moroccan company Green of Africa (10%). The Moroccan Sustainable Energy Agency (Masen) owns the remaining 25% of the Noor Midelt I hybrid solar project. The power plant to be built in central Morocco will combine photovoltaic solar energy and concentrated solar energy.

For the concentrated solar part, mirrors are installed to capture the sun’s rays in order to heat a thermal fluid that turns a turbine to produce electricity. With the photovoltaic part, the Noor Midelt I hybrid solar power plant will have a total capacity of 800 MW.

“By combining photovoltaic and CSP (concentrated solar energy) technologies in the same installation, the proposed plant will have improved efficiency and storage capacity that will allow it to produce electricity at a competitive price all day and up to five hours after sunset,” EDF said after the award of the large contract.

The project will require an investment of €740 million. The EDF-led consortium will be able to count on loans from several development partners, including the European Investment Bank (EIB), the Kreditanstalt für Wiederaufbau (KfW), the German development agency and the International Finance Corporation (IFC), the World Bank’s private sector financing subsidiary. The French Development Agency (AFD) and the African Development Bank (AfDB) are also supporting the Noor Midelt I hybrid solar project.

The design and construction of the plant were entrusted to TSK, a company based in Gijón, Spain. It is expected to start work before the end of 2019 to deliver all the facilities in 2022. The consortium led by EDF will sell electricity at MAD0.68 (€0.06) per kWh. This should make it possible to supply more than one million Moroccan households and avoid emissions of 572,000 tonnes of carbon dioxide per year.