Homepage » MOROCCO: €52m for the rehabilitation and extension of ONEE’s water facilities

MOROCCO: €52m for the rehabilitation and extension of ONEE’s water facilities 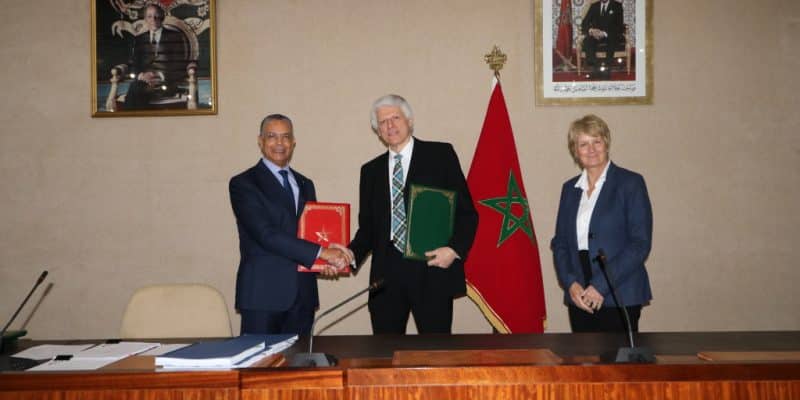 In 2023, the National Office of Water and Electricity (ONEE) will be rehabilitating and extending its facilities in several Moroccan cities. The work, financed by a 52.6 million euro loan from the German development agency Kreditanstalt für Wiederaufbau (KfW), will improve and secure the water supply in the Kingdom of Morocco.

In Morocco, the National Office of Water and Electricity (ONEE) has concluded three financing agreements worth 52.6 million euros (585.5 billion Moroccan dirhams) with Kreditanstalt für Wiederaufbau (KfW), the German development agency. The contracts were signed recently between Joerg Dux, Head of the Water Resources and Waste Management Division for North Africa at KfW and Abderrahim El Hafidi, Director General of Onee.

The financing will be used to rehabilitate and expand the Moroccan public utility’s drinking water facilities. The first financing contract, worth 28.5 million euros (317.4 billion Moroccan dirhams), concerns the increase in production, as well as the pumping and transport of drinking water in “small and medium-sized centres” such as Kelaâ, Laattaouia, and Tamellalt. According to ONEE, the work also aims to “set up a remote management system for the drinking water supply project (AEP) of the city of Marrakech from the Al Massira dam, as well as to carry out the work of bringing in the electric line”.

At a cost of €21 million (233.8 billion Moroccan dirhams), the second financing contract specifically targets the treatment, securing and storage of drinking water in order to cover the current and future needs of the areas already served or being extended. With regard to the

Since 1981, the German development agency has already granted 902 million euros to ONEE for the realisation of its “strategic objectives” in the fields of drinking water and liquid sanitation in Morocco. Earlier in 2020, the Moroccan government, through ONEE, received a $30 million loan from KfW. The funds were used to build new drinking water facilities in 150 small villages in the provinces of Tangier and Chefchaouen, and in other areas of Morocco not yet connected to the drinking water network. The work involved the construction of small water pumping stations, storage tanks and distribution pipes.

ONEE is currently carrying out other investments, notably as part of the National Drinking Water Supply and Irrigation Programme (PNAEPI) 2020-2027 in Morocco. In the second half of 2022, the public company launched a project to strengthen and secure the drinking water supply in Salé, a city located 13 km from the capital Rabat. The 126 million dirham (€12 million) initiative will benefit 982,000 people until 2035. It will increase the capacity of the existing facilities, by treating the water from the Sidi Mohamed Ben Abdellah dam, from 104,000 m³ per day to nearly 256,000 m³ per day.