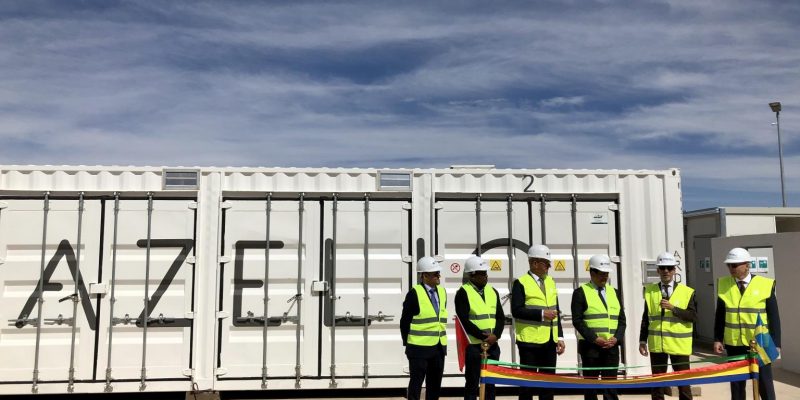 A thermodynamic solar energy storage system was inaugurated on March 5, 2020 at the Noor Ouarzazate solar complex in Morocco. The project of the Moroccan Agency for Sustainable Energy (Masen) was carried out by the Swedish company Azelio.

The solar complex of Noor Ouarzazate now has a storage system. It has recently been inaugurated by Azelio, the Swedish company that won the contract for the installation of its storage technology. The ceremony took place in the presence of officials from the Moroccan Agency for Sustainable Energy (Masen), which is at the origin of the project.

Azelio has installed a system that allows Noor’s Concentrating Solar Power (CSP) plant to provide electricity 24 hours a day. “A phase change material (PCM) is heated up to 600°C and liquefied in a container. During discharge, heat is transferred from the PCM to the Stirling engine via a heat transfer fluid (HTF). A gas is heated and cooled by the surrounding air, and thus drives the engine,” explains Azelio.

Commissioning before the end of 2020

The storage system installed in the Noor complex uses recycled aluminium as the storage medium. In other words, the system is free of rare minerals and will not suffer a reduction in storage capacity over time. Azelio’s system is thus capable of storing between 100 kW to 100 MWh of electricity.

The Swedish company plans to complete the final storage checks before the end of the first quarter of 2020 for commissioning before the end of the year. “Being present on one of the world’s largest renewable energy scenes is a big step for Azelio and is the platform from which we will become a global industrial player,” says Jonas Eklind, Azelio’s CEO.

As a reminder, the Noor Ouarzazate solar complex will have a capacity of 570 MW. The first phase of the project has enabled the construction of a 160 MW parabolic trough concentrating solar power plant (Noor I). The plant was commissioned in February 2016. For the second phase, Independent Power Producers (IPPs) will build two concentrating solar power plants with a storage system.

The Noor II parabolic trough power plant will have a capacity of 200 MW. With an expected capacity of 150 MW, Noor III consists of a solar tower plant. In such an installation, the tower receives concentrated sunlight from heliostats. Despite the movement of the sun, this device allows the solar rays reflected by the mirrors to be projected at a fixed point.