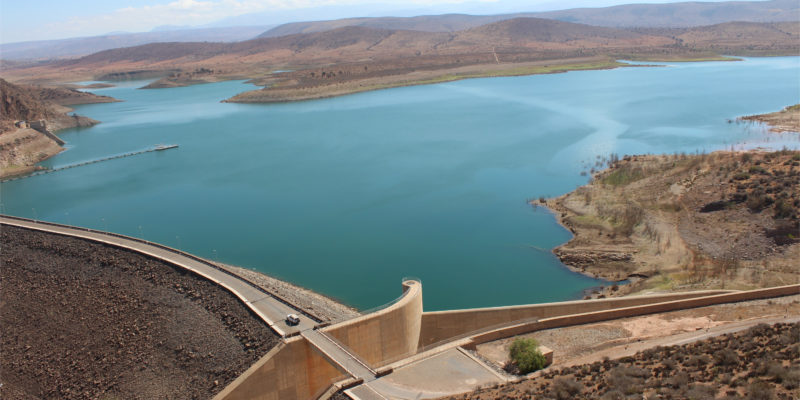 The second Moroccan water reservoir has lost nearly 63% of its water in the last three years. This phenomenon has not occurred since 2008 and is likely to have a multitude of consequences.

The area of Al Massira (located in the Settat region), Morocco’s second-largest reservoir, has been reduced by more than 60%. These figures were revealed by a study conducted by the American think thank World Resources Institute, specialised in environmental issues.  The cause: the drought observed in recent years, irrigation problems and the growing thirst of neighbouring towns, particularly Casablanca.

Several negative consequences are expected as Al Massira reservoir serves the Moroccan capital, Casablanca and several other cities of the Kingdom and also supplies the Doukkala region with water for agricultural activity. A sector which, according to Huffpost Magrehb, employs more than one third of Moroccans and generates 14% of GDP. A drop in water supply could constitute a real difficulty for this sector and the Moroccan economic sector. The Al Massira reservoir had already suffered from an identical drop in the volume stored between 2005 and 2008, affecting nearly 700,000 people. This had led to a drop in cereal production of almost 50%.

And the situation is not about to improve.  “As reservoir levels continue to decline, water demand continues to increase. In addition to the growing demand for urban water and the expansion of irrigated agriculture, the city of Marrakech plans to draw water from Al Massira, through a major water transfer project, operational this year and funded by the African Development Bank,” says the American think tank.

Drying level could double in 30 years

According to the American group, water demand in Morocco will increase by two thirds by 2050, in several large Moroccan cities. According to the same study, this situation should worry the authorities more. Climate change is expected to reduce water supply while demand increases, leading to increased water stress. The Moroccan government should therefore set up “strong water management institutions and adequate social safety nets to help farmers through (future) periods of intense and prolonged drought,” recommends the World Resources Institute.

The drying up of water reservoirs is a phenomenon that is increasing worldwide.

DRC: Ituri launches its own electricity company and aims for 15 MW of clean energy

CAMEROON-CONGO: the 600 MW hydroelectric project on the Dja/Ngoko river relaunched in 2021?