Homepage » MAURITIUS: The oil spill reinforces the extermination of the “Cardinal of Mauritius”. 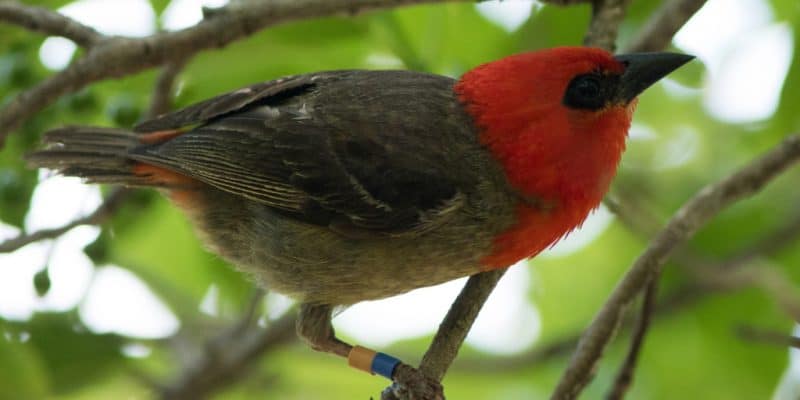 The Cardinal of Mauritius, a bird species endemic to Mauritius, is in great danger of extinction. The oil spill that occurred on July 25th, 2020 in the broad south-east of the island polluted and contaminated the habitat of this small bird whose existence was already threatened by human activities. Estimated at just over 200 individuals in the wild, the population of this bird species has been reduced to a third in the space of 50 years.

The extinction of an animal species is announced in Mauritius. The foudia rubia, a small bird endemic to Mauritius nicknamed “the cardinal of Mauritius”, is in danger of disappearing from the earth if urgent measures are not taken. This is at least the fear expressed by ecologists two months after the sinking of a Japanese ship off the south-east coast of Mauritius, which resulted in the spillage of more than 1,000 tonnes of fuel oil into the sea and onto the coast. Although the impact of this oil spill is still being assessed, scientists are already talking about the disastrous consequences for a rare species native to the region. “Some of our birds, especially the Cardinal of Mauritius, feed on insects, but also on the nectar of flowers. If the food chain is affected, we think it will disturb our birds and reproduction could be affected,” says Vikash Tatayah, conservation director at the Mauritius Wildlife Foundation, an NGO that works to safeguard biodiversity in Mauritius.

Indeed, the habitat and food sources of the Cardinal of Mauritius – mangrove forests, sea grass beds and coral reefs – have been polluted and contaminated by oil, making the bird’s daily life more difficult. Housed in the list of the 100 most endangered species in the world drawn up by the International Union for Conservation of Nature (IUCN) in 2012, the Cardinal of Mauritius was already under threat due to the destruction of its habitat and predation. The bird nearly disappeared, due to deforestation, rats and other harmful species brought by man. In 2003, there were just over 200 Mauritian cardinals on the island, compared to over 700 in the Mauritian forests 30 years earlier.

Several biodiversity hotspots have been contaminated by the oil spill

In addition to the threat of extermination of endemic species, the oil spill that occurred on July 25th, 2020 in the broad south-east of Mauritius has weakened the unique fauna of this island, which depends on the connections between reefs, lagoons, sea grass beds and mangroves. The oil had spread just in front of a nature reserve (Ile aux Aigrettes), a few kilometres from a marine park (Blue Bay) and close to a wetland of international importance (the Pointe d’Esny, a Ramsar listed site).

In order to limit the damage caused by this disaster, clean-up operations on the beach and the sponging of fuel oil into the sea are continuing. These efforts are supported by the international community, such as the African Development Bank (AfDB), which has released 500,000 dollars to assist the authorities in this crisis. However, Vikash Tatayah warns that “intensive cleaning can render the coasts sterile, and prevent the re-colonisation of algae and molluscs in the reefs”. There is a glimmer of hope, however,” the ecologist continues, “there are microbes in nature that will digest the oil product as the waves and winds roll by. But it can sometimes take months or years…”