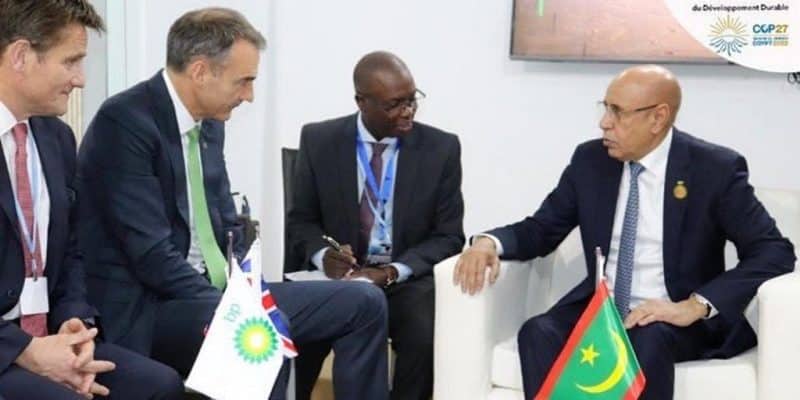 The British oil company bp has signed an agreement with the Mauritanian authorities to explore the country's potential for the production of green hydrogen. The agreement was signed on the sidelines of the 27th United Nations Conference of the Parties on Climate Change (COP27), which closes on 18 November 2022.

The British oil company bp wants to diversify its activities. In addition to exploiting fossil fuels, the group plans to invest in the emerging green hydrogen industry and its derivatives in Mauritania. Present in Sharm el-Sheikh for the 27th United Nations Conference of the Parties on Climate Change (COP27), the group’s senior executives signed an agreement with the Mauritanian authorities to explore the possibility of investment in Mauritania.

This was in the presence of the Head of State Mohamed Ould Cheikh El Ghazouani and Abdessalam Ould Mohamed Saleh, the Mauritanian Minister of Petroleum, Mines and Energy. Under the agreement, the London-based oil company plans studies to assess the technical and commercial feasibility of producing green hydrogen in Mauritania.

“Initially, bp will conduct a data collection campaign with studies assessing the suitability of wind and solar resources in selected sites for large-scale renewable energy production and green hydrogen production,” bp said. The British oil company joins two other investors in the country.

This is the case of CWP Global. The energy group based in Newcastle, Australia, has landed in Mauritania with a clear objective, to develop a production capacity of 1.7 million tonnes per year of green hydrogen or 10 million tonnes per year of green ammonia for local use and export. To achieve this, the company led by Mark Crandall intends to develop 30 GW of electricity generation capacity.

For its part, the British company Chariot has joined forces with Total Eren, the subsidiary of the French oil company TotalEnergies, to implement the Nour project. The project involves the construction of solar and wind farms in the Mauritanian desert with a capacity of 10 GW. This clean electricity will be transformed into green hydrogen via electrolysis. In order to carry out its project, Chariot has obtained a 14,400 km2 plot of land from the Mauritanian government on which pre-feasibility and feasibility studies will be conducted.