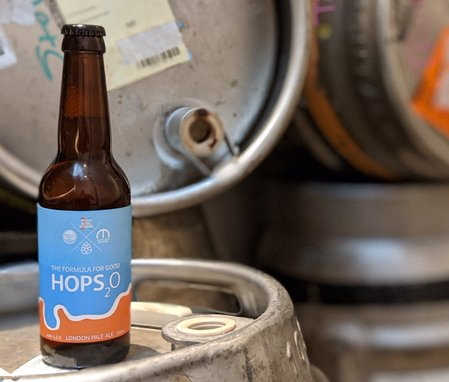 "HOPS₂O", a pale beer, was recently launched in Malawi by Thames Water, a British water treatment company. The new alcoholic beverage will go on sale on March 20, 2020 in a limited edition. The profits will be used to finance drinking water projects in Malawi. The " HOPS₂O " project is part of the Brewgooder Global Gathering campaign to raise funds for water projects in Africa.

“HOPS₂O”, London’s new pale beer, is decked out in the orange and blue colours of Brewgooder, a social enterprise committed to ending water problems in Malawi. The design of the new alcoholic beverage is inspired by the Thames, the main river in the United Kingdom. HOPS₂O” was recently launched in Malawi by Thames Water, a British water treatment company. It brings to 250 the number of small batch beers launched by Brewgooder as part of the Brewgooder Global Gathering campaign. The campaign aims to raise funds for drinking water projects in Africa.

“HOPS₂O” is produced by Moncada Brewery, a London-based brewery that is a partner of Thames Water. The beer will go on sale in Malawi on the 20th of March 2020 in a limited edition on the occasion of World Water Day.

Drinking water is scarce in Malawi. The funds raised by Thames Water will support more than 130 water and sanitation projects in Malawi, including the rehabilitation of wells, the creation of new boreholes and sanitation systems among others. “There are many people in the developing world who see their ambitions, dreams and potential limited because of the lack of clean drinking water. By providing clean and accessible water, we can help children grow up healthier, stay in school longer and build a better life,” says Brewgooder founder Alan Mahon.

Apart from the Brewgooder Global Gathering campaign, the company has helped finance several water supply projects in Malawi, including the construction of boreholes, well maintenance and repairs. To date, the company has, among other things, provided 40,000 people with drinking water in the Dedza and Thyolo districts of Malawi.