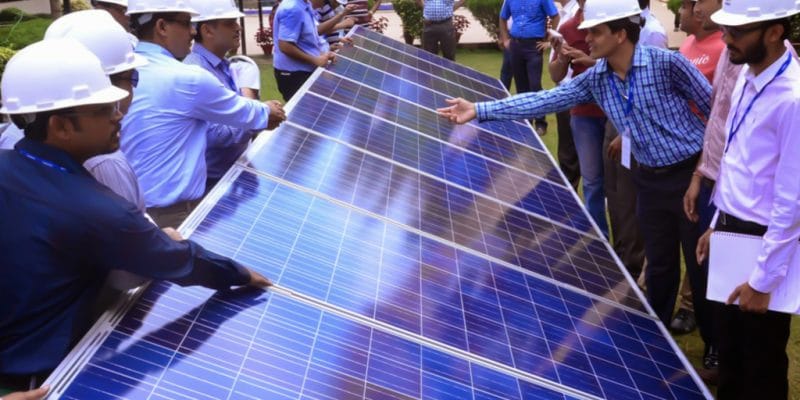 Deutsche Gesellschaft für Internationale Zusammenarbeit (GIZ), the German cooperation agency, has launched a training project for young people in Libya. They will learn jobs related to the exploitation of renewable energies.

Since the fall of Muammar Gaddafi in 2011, Libya has been a country plagued by internal conflicts. Clashes between armed groups are still ongoing in major cities such as Misrata, Ras Lanouf, Benghazi and even around the capital Tripoli. The Libyan authorities and even the international community seem to be facing a deadlock. The state is bankrupt.

In this climate of insecurity, the country of 6,375 million inhabitants has missed the ongoing energy revolution on the African continent, with the rise of solar power in particular. However, in this desolate situation, Deutsche Gesellschaftfür Internationale Zusammenarbeit (GIZ), the German cooperation agency, is raising hopes, especially among young people. It decided to launch a training project entitled “Promoting employment and private sector development in Libya”, the objective of which is to train young people in the new trades resulting from the development of renewable energies.

The objective of GIZ is to strengthen the capacity of trainers from several training institutes currently working in Libya. These include the Korean Centre in Libya, the Libyan Renewable Energy Authority (REAOL), the Libyan Centre for Solar Energy Research and Studies (CSERS), the Higher Institute of Comprehensive Occupations, the College of IndustrialTechnology in Misrata and the Zliten Technical Organization.

Due to the current insecurity in Libya, capacity building for teachers from different institutions is being organised at the Higher Institute of Technological Studies in Tozeur (ISET Tozeur) in southwest Tunisia. Once there, in Libya, the three-month accelerated training is done in groups of about 20 young students.

The training focuses on off-grid energy and pumping water from solar energy. More specifically, young people are trained in the installation, maintenance and repair of photovoltaic equipment. This will allow future professionals to install solar mini grids in clinics, hospitals, schools or homes. The training project “Promoting employment and private sector development in Libya” also has an entrepreneurial component. The objective is to give young people the opportunity to launch start-ups that can provide access to energy. In this training, GIZ supports internally displaced people, war wounded and women. The project started in 2018 and is expected to run until 2022. It is supported by the Libyan Ministry of Labour and Capacity Building. The German Federal Ministry for Economic Cooperation and Development (BMZ) is providing €5 million in funding.