Homepage » KENYA: Two of the three white giraffes in the world killed 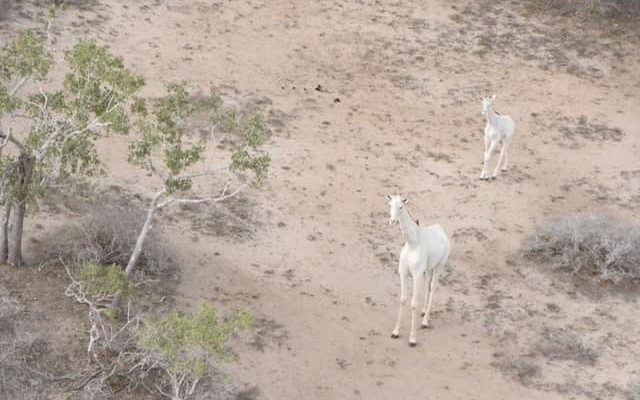 The existence of the white giraffe on planet earth has now been reduced to a single male baby giraffe. Its mother and sister were shot in the Ijara Reserve in eastern Kenya. National and international conservation authorities are in shock.

Kenya has recently lost a key flagship of national ecotourism. White giraffes, the main tourist attraction of this East African country, have been reduced to a single specimen, a male baby. Its mother and sister have been shot by poachers. The skeletons of the two giraffes were found in the Ijara Reserve in eastern Kenya.

Mohammed Ahmednoor, director of Ishaqbini Hirola, the local association that manages the Ijara Reserve, said on March 10, 2020: “This killing is a blow to the important steps taken by the community to preserve rare species and a call for vigilance for continued support for protection efforts”. It was in this protected area that the white giraffe was placed in 2017 after its discovery in March 2016 in Kenya. It has been admired and studied by scientists and wildlife enthusiasts around the world. It was the only white giraffe in the world. According to scientists, its white colour was due to a genetic disease called leukism, which prevents skin cells from producing pigments. A disease that is also found in white tigers. Leukism traits also occur in birds, lions, fish, peacocks, penguins, eagles, hippos, moose and snakes.

The reasons for the massacre of the two white giraffes, whose remains were found in Ijara, have yet to be determined, as well as the perpetrators. The Kenya Wildlife Society, the country’s leading conservation organisation, recently stated that it was investigating the killings.

Giraffe hunting is illegal in Kenya but the world’s slenderest mammals are still poached for their skin, meat, bones and tails. In Laikipia, in central Kenya, the Samburu community is used to eating them. According to them, killing one giraffe can feed an entire family for a week.