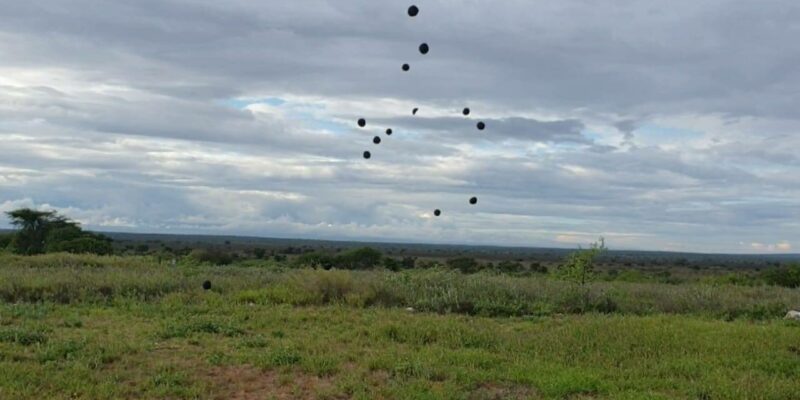 Seedballs offers a new solution for reforestation in Kenya. The young start-up manufactures "seedballs", which are dropped on areas destroyed by illegal logging. This process comes at a time when Kenya wants to increase its forest cover to 10% by 2030.

Seedballs continues its journey towards a greener Kenya. The start-up, born in 2016 from a collaboration between two eco-companies, Chardust and Cookswell Jikos, produces “seed bombs”. Seedballs of native tree seeds encased in a protective capsule made from charcoal dust and nutritious binders. These tree seeds are then dropped (hence the name “seed bombs”) from flying helicopters over treeless areas such as clearings, savannahs, steppes and areas degraded by illegal logging. “Non-toxic and porous, it acts like a sponge that helps the plant to germinate, even in arid regions. It is also available in large quantities and at a derisory price,” explains Teddy Kinyanjui, co-founder of Seedballs.

This form of cost-effective and efficient reintroduction of trees and grass species into degraded areas of the country is being adopted by both individuals and environmental organisations such as the Mara Elephant Project. Last year the NGO dropped some 22,000 “seed bombs” in the Masai Mara Game Reserve in south-west Kenya. The aim was to restore a viable habitat for elephants, which had been degraded by deforestation. In the wild, the germination rate is 5-10%.

According to a study by the United Nations Environment Programme, Kenya’s forest cover has increased from 10% in 1963 to about 2.5% today. This decline in forest area is fuelled by unsustainable forest use by local people, such as the felling of trees for building materials and fuelwood, overgrazing, land-use changes and bush fires. The phenomenon is aggravated by population growth and the lack of alternative livelihoods to forests.

In an effort to restore forest cover to 1963 levels, the Kenyan government has joined the Restoration Initiative (TRI), a project launched by the United Nations (UN) in 10 Asian and African countries to regenerate forests. The Kenyan component of the TRI uses an integrated approach to address deforestation issues by supporting forest and landscape restoration implemented by local people and eco-businesses such as Seedballs.