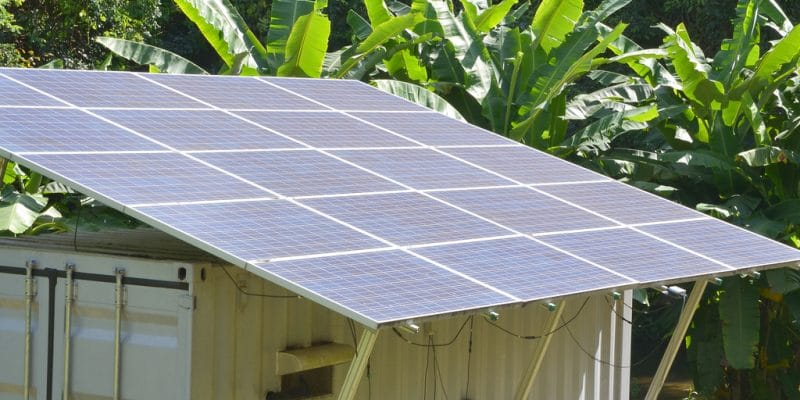 The French industrial group Schneider Electric has recently launched the marketing of its containerised solar mini-grids. They are intended to electrify villages and especially to serve the refugee camps of East Africa.

Presented in preview at COP24, late 2018, by the French Schneider Electric, a new solution to facilitate access to electricity in Africa is now ready for use and marketable: “Villaya Emergency”. It is a containerised mini-solar network with a capacity of 10 kW, a quantity of energy capable of supplying a small village, a company, a health centre or a school.

Assembled in Kenya, this system consists of pre-wired solar panels, mounted on wheels and placed on a mobile system called EXOrac. The whole system is connected to batteries installed inside the containers. Olivier Jacquet, head of the “Emergencies, Refugees and Conflict” team at Schneider Electric, explains that “Villaya Emergency” is designed to make installation easy. Most importantly, it is intended to provide electricity in many refugee camps in Africa.

In Kenya, for example, Schneider Electric will market its mini-grids to non-governmental organisations (NGOs) working in many Somali refugee camps fleeing Islamist Chababs insurgents affiliated with the terrorist movement Al Qaeda. “We have made sure that the system can operate in extremely hot conditions and that it can be installed or dismantled as required, without any damage,” explains Olivier Jacquet.

In addition to Kenya, these easy-to-carry mini-grids could help refugees in western Uganda and eastern Democratic Republic of Congo, where men are fleeing militia violence. With refugees fleeing violence in the Central African Republic (CAR), eastern Cameroon is also targeted by the French industrialist. The same is true in Southern Sudan, where refugees are victims of political disputes that turn into armed clashes. Moreover, Schneider Electric would not be the first company to offer an electrification solution on containers with solar panels. Aptech Africa, a company specialising in the supply of water and of grids, is already present on the Sudanese market for containerised solar mini-grids. Recently, this company based in Kampala, Uganda, provided a 79 kWp mini-grid to Eye Radio, one of the few radio stations in Juba, the capital of Southern Sudan. It has a 125 kWh lithium-ion storage system that provides energy after sunset.