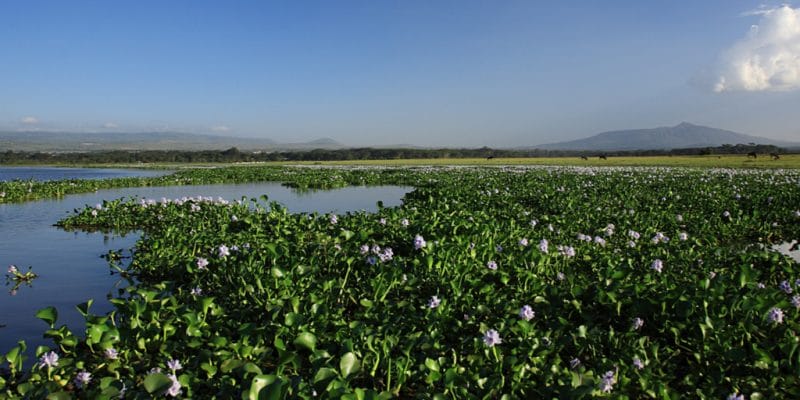 The Russian government has recently provided financial backing for a project to combat the spread of water hyacinth on the Kenyan side of Lake Victoria. Pollution is at the origin of the proliferation of this invasive plant.

The government of Kisumu County in Kenya has just obtained funding for the fight against water hyacinth. It comes from Russia, which is allocating $7 million to combat this invasive plant that is occupying more and more space on Lake Victoria.

The water hyacinth runs like a trail of powder over Lake Victoria. This phenomenon is caused by pollution of the lake, particularly by the wastewater that flows into it. They come from the large cities that border this freshwater body located in the heart of the Great Lakes region of East Africa. “Untreated wastewater causes eutrophication of the entire lake and provides a fertile environment for invasive weeds such as water hyacinth. As a result, fish stocks are running out,” said Naoko Ishii, Executive Director of the Global Environment Facility (GEF), recently.

The water hyacinth forms a thick layer over Lake Victoria, preventing any boat from navigating the contaminated area. However, the lake is at the heart of economic exchanges between the countries of the sub-region. This shows the importance of Russian financing.

It will enable the implementation of a project initiated by the Kisumu County Government in partnership with the Food and Agriculture Organization of the United Nations (FAO) and the United Nations Development Programme (UNDP). The FAO will focus on sustainable land management and environmental policy aspects, while UNDP will focus on economic aspects.

In concrete terms, the project will provide support to private investors for the development of water hyacinth. This plant can be used to produce biogas, a very purified product that can replace ordinary gas or avoid excessive logging by people living in rural areas.

The valorisation of water hyacinth

Several local, national and international companies are already interested in the development of biogas in Kenya. This is the case of the Anglo-Swedish pharmaceutical group, AstraZeneca, which has partnered with the Cambridge Institute for Sustainability Leadership (Cisl), a research institute based in England, to build 50 biodigesters in Dunga Beach, Kisumu County.

The goal of the Kisumu Government’s project is to rid Lake Victoria of water hyacinth on at least 14,000 hectares. It will be spread over a period of three years. According to the government, the project is expected to benefit 4.5 million people who share Lake Victoria in Kisumu, Busia, Migori, Homa Bay and Siaya counties.

“This programme is part of the Russian government’s support for the sustainable development of Africa, the African Union’s Agenda 2063, Kenya’s Vision 2030 and its Big Four Agenda. We look forward to working in partnership with the Government of Kenya and the UN team in Kenya to develop the country’s potential to achieve the UN’s Sustainable Development Goals (MDGs),” said Dmitry Maksimychev, Russian Ambassador to Kenya.

As a reminder, the Big Four Agenda is a vast development plan announced by Kenyan President Uhuru Kenyatta after his re-election in 2017. The aim is to set Kenya’s economy on the road to emergence by 2022. The clean-up of Lake Victoria is an important issue in this context.