Homepage » KENYA: London to support climate action with $4bn investment
This article is part of the dossier
COP27: WHAT ARE THE CHALLENGES FOR AFRICA AT A TIME OF CONCRETE SOLUTIONS 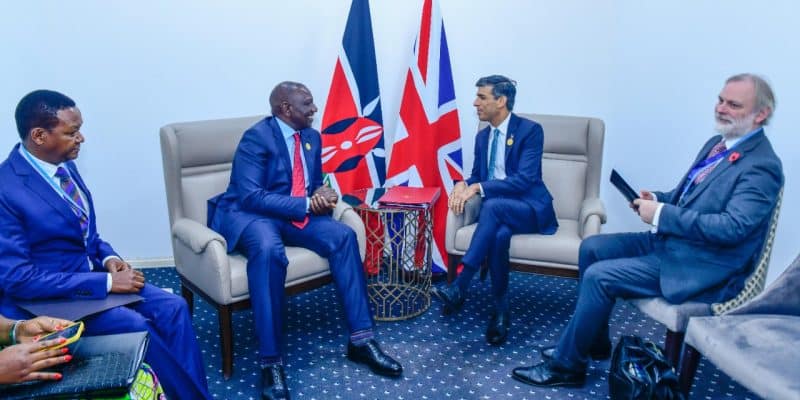 At the 27th United Nations Climate Conference (COP27) in Sharm-el-Sheik, Egypt, the new British government is pledging an investment of 500 billion Kenyan shillings to support climate action in Kenya. This investment will support at least six green infrastructure projects.

It is a good harvest for Kenya as it participates in the 27th United Nations Climate Conference (COP27) in Egypt. On the sidelines of this international meeting, which is being held under the banner of the climate emergency, Kenyan Head of State William Ruto held talks with the new British Prime Minister Rishi Sunak. The two leaders committed to a Kshs 500 billion investment plan to support Kenya’s “leadership on climate change”.

Kenya welcomes the decision by United Kingdom to fast-track new green investments in the country. We commit to further our cooperation, particularly in the areas of regional peace and security, energy, agriculture and infrastructure. pic.twitter.com/mZQsQozAfl

The funding is intended to support a number of climate change mitigation infrastructure projects. On the energy front, the UK is promising to support the development of the Grand High Falls hydropower scheme. The project, which will be implemented about 280 kilometres from the capital Nairobi, involves the construction of a dam at Kibuka Falls on the Tana River. The dam will be capable of holding 5.6 billion m3 of water, which will generate 1,000 MW of hydroelectric capacity. It will be the largest hydroelectric plant in Kenya.

Financing the Grand High Falls hydroelectric project as a PPP

In addition to the production of electricity, the hydroelectric development should also allow the development of irrigated agriculture in a local context marked by the resurgence of drought episodes. The Kenyan government estimates that the future water reservoir could irrigate 400,000 hectares of farmland. However, the project is contested. It is being implemented near the Mwingi National Reserve, which is a biodiversity hotspot that is home to large mammals that are emblematic of the African savannah, including buffaloes, zebras, hippos, cheetahs, giraffes, etc.

The dam lake, which is expected to cover an area of 165 km2 between Kitui and Tharaka-Nithi counties, is expected to displace 4,500 families. The project is being implemented under a public-private partnership (PPP) involving the British engineering company GBM, which is expected to sign a power purchase agreement (PPA), as well as a water purchase agreement for agricultural irrigation with the Kenyan authorities. The project will receive an investment of Sh425 billion from the UK government, equivalent to $3.4 billion.

Investment in solar and geothermal energy

Rishi Sunak has also pledged 7.5 billion Kenyan shillings ($61.6 million) for the expansion of the Malindi solar photovoltaic plant. The 40 MWp facility, which will be commissioned in December 2021 by British independent power producer (IPP) Globeleq, will see its capacity doubled. The plant will also be equipped with a battery storage system, representing an overall investment of 15 billion shillings, or just over 123 million dollars.

For the Menengai geothermal project in the Rift Valley, London is providing 12.5 billion shillings, almost $103 billion. This funding will allow for the construction of a 35 MWe power plant running on steam generated from the natural heat of the ground. The geothermal project is being implemented through a partnership between the Kenyan state-owned Geothermal Development Company (GDC) and Globeleq. The joint venture has already signed a PPA with Kenya Power (KPLC), the state-owned company that transmits and distributes electricity in Kenya.

In addition to energy, the investment plan of over $4 billion also covers the development of climate-smart agriculture through an agro-industrial project. This project is being implemented by a joint venture between Kisumu County and the British group United Green. It will receive 31 billion shillings (over $254 million) in funding from the UK government, which estimates that 20,000 people will benefit from this green farming initiative.

On the mobility front, the new railway station project in the Kenyan capital is receiving $94.5 billion. This project is designed to enable the “green” regeneration of the centre of Nairobi. The future station will be linked to a bus rapid transit system, which incorporates the latest “innovations in green building technology and planning”, says the Kenyan government.

The project was developed with technical assistance from the UK government. Epsom, England-based Atkins won the contract to design the new station. London is also funding $16.4 million to set up a new Kenya-based company dedicated to financing sustainable infrastructure. This project is being led by investment companies InfraCo Africa and Cardano Development for a joint investment of $20 million.