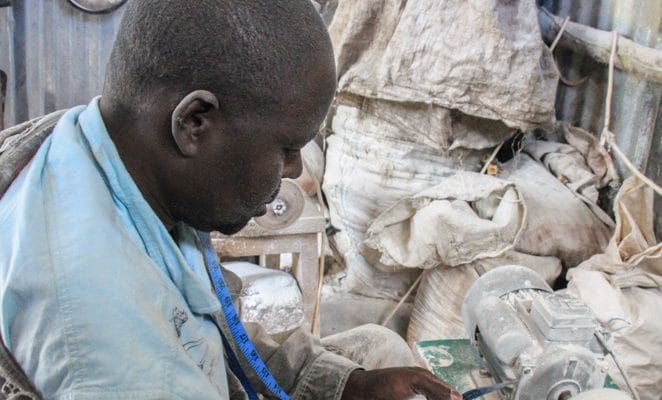 Victorious Craft Group, a start-up created in 2006 by Jack Nyawanga, a 31-year-old Kenyan, specialises in the recycling of animal bones. An activity that helps reduce unemployment and protect the environment in Kibera, a slum in the south of Nairobi, Kenya's capital.

Producing jewellery based on animal bones. It is the concept developed by Jack Nyawanga, founder of Victorious Craft Group, a start-up created in 2006. The raw material used by this artisanal jeweller is made of recycled materials. Including bones, plastic waste and other recyclable materials collected from the streets of Kibera, in Kenyan.

Jack’s project did not emerge from anything. At the age of 18 at the time, the young entrepreneur noticed that animal bones were lying on the street. To clean up the environment, he then decided to embark on his project. “I had thought about how to remove these smelly bones from the streets of Kibera, clean them up and then use them wisely. The objective was to make these bones reusable by the population. ”, he tells Face2Face Africa. From Jack’s accomplishments, it can be said that he has succeeded in making his dream come true.

Bone instead of gold

The team of 20 people manufactures necklaces, bracelets, earrings and hair clips. Kitchen tools such as bowls, salad bowls, coffee spoons and more are also delivered by this young company to local and sub-regional distributors.

In the meantime, Jack buys the bones from restaurants in Kibera to obtain the raw material. The first step in the manufacturing process is to sharpen the bones with a circular blade and then smooth them with sandpaper. The bones are then boiled with hydrogen peroxide. This step removes the oil from these bones and facilitates the absorption of the paint. Candle wax is then applied to them before dipping them into a dye container. After one hour, the bones are coloured and assembled to form jewellery. The company’s daily production is about 400 earrings and 200 necklaces, entirely handmade.