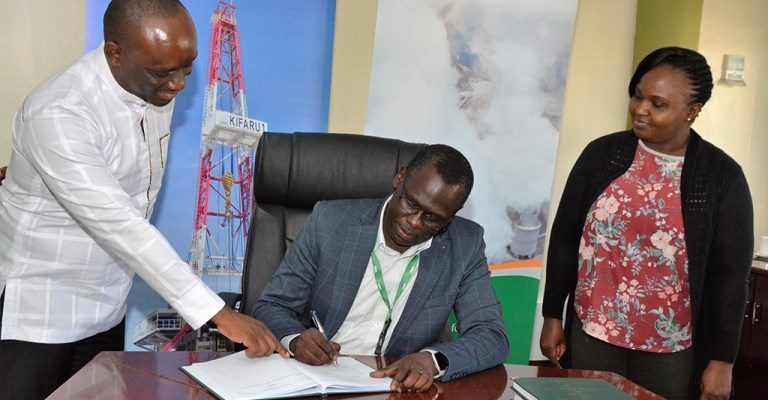 The Kenyan central government has just signed for a $14.5 million grant from the Geothermal Risk Mitigation Fund (GRMF) for the implementation of the Baringo-Silali geothermal project. It is being implemented by the Geothermal Development Corporation (GDC) owned by the Central Government of Kenya.

The grant agreement worth 1.6 billion Kenyan shillings (US$14.5 million) was signed between the African Union, represented by the African Union Commission, which is the contracting authority, and the National Treasury of Kenya, which is the beneficiary. The funds go to the Geothermal Development Corporation (GDC) which is developing the Baringo-Silali geothermal project.

The grant from the African Union’s Geothermal Risk Mitigation Fund (GRMF) will support a drilling and testing programme and infrastructure upgrades at the Paka geothermal site in the Rift Valley in western Kenya. In addition to Paka, the Baringo-Silali geothermal project is being spread over two other sites, namely Korosi and Silali.

According to the state-owned company GDC, exploration drilling has already started at the Paka site. This is not the first grant GRMF has awarded to GDC for the Baringo-Silali geothermal project. In November 2019, the fund that promotes the development of geothermal energy in East Africa awarded a grant of 1.9 billion Kenyan shillings (US$17.2 million) to GDC. A few weeks before, the company received another grant of 1.3 billion Kenyan shillings ($11.8 million).

This clean energy project is attracting so much interest because it is promising. According to GDC, each site of the Baringo-Silali geothermal project will have a power plant at each site that will use steam emitted from the heat underground to drive its turbines, providing 100 MWe. The three sites will therefore supply a total of 300 MWe. Experts estimate that the Baringo-Silali geothermal site can produce up to 3,000 MWe, enough to reinforce Kenya’s status as the leading producer of geothermal energy in Africa.