KENYA: EU, EIB and AFD join forces for water and sanitation in Kisumu 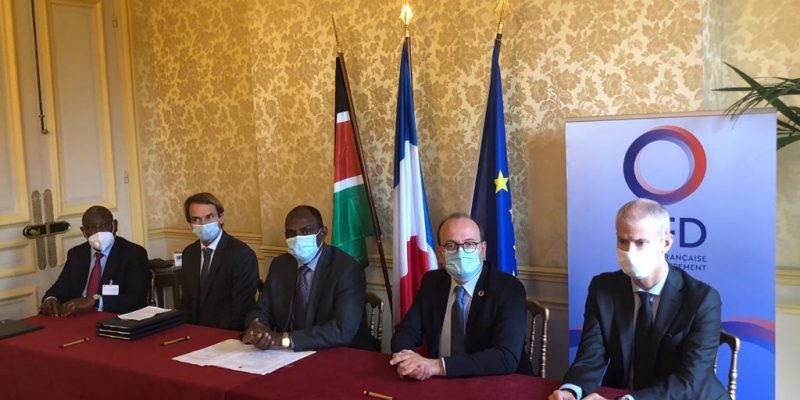 The Kenyan authorities have just signed several financing agreements with the European Union (EU), the European Investment Bank (EIB) and the French Development Agency (AFD) for a drinking water and sanitation project in Kisumu County in western Kenya.

The Kenyan central government can now focus on the implementation of the Lake Victoria Water and Sanitation Project (LVWATSAN). On the side-lines of his recent visit to France, the President of Kenya Uhuru Kenyatta, validated several financing agreements for LVWATSAN with the project’s main partners. The European Union (EU) will support the project with a €5 million grant.

With Grégoire Chauvière Le Drian, the head of the European Investment Bank (EIB) group office in France, the cabinet secretary for the National Treasury of the Government of Kenya Ukur Yatani signed an agreement for a loan of 35 million euros. For its part, the French Development Agency has agreed to lend an additional 20 million euros for the construction of LVWATSAN in the city of Kisumu in western Kenya.

“Thousands of Kenyans living on the shores of Lake Victoria will benefit from improved access to drinking water and better sanitation thanks to the excellent cooperation between Kenya, AFD, the EIB and the European Union. This impressive water project will contribute to improving health, reducing child mortality and fighting poverty in communities facing climate change and strengthening efforts to combat Covid-19”, says EIB Vice President Ambroise Fayolle.

A project implemented by the LVSWWDA

According to the European Investment Bank, in Kisumu (Kenya’s third largest city after Nairobi and Mombassa, editor’s note), the proximity of Lake Victoria does not automatically guarantee access to drinking water for its 800,000 inhabitants. The lake is currently experiencing high levels of pollution due to inadequate sanitation infrastructure. “AFD has been financing the rehabilitation and extension of the city’s water supply and sanitation infrastructure since 2005, thus considerably increasing Kisumu’s water production capacity”, the EIB said.

The Lake Victoria Water and Sanitation Project (LVWATSAN) to be implemented by the Lake Victoria South Water Works Development Agency (LVSWWDA) will extend the water supply and sanitation network in Kisumu, including informal settlements, and develop water supply to satellite cities, particularly Ahero and Maseno. In addition, there will be a water quality monitoring component for Lake Victoria. The aim is to protect this shared (regional) water resource and to increase efficiency in water treatment.

According to the EIB, thanks to the financing it has just granted with AFD and the European Union, the water and sanitation networks of the city of Kisumu will benefit from a major extension, helping to cover the needs of the population, at least until 2030. In addition to donor financing, the Kenyan central government is expected to invest 10 million euros in the project.

Apart from Kisumu in Kenya, the Lake Victoria Water and Sanitation Project has also been implemented in the town of Mwanza in Tanzania. Thanks to a 40 million euro loan allocated by AFD, the China Civil Engineering Construction Corporation (CCECC) has built several sanitation infrastructures to serve the city and neighbouring localities.