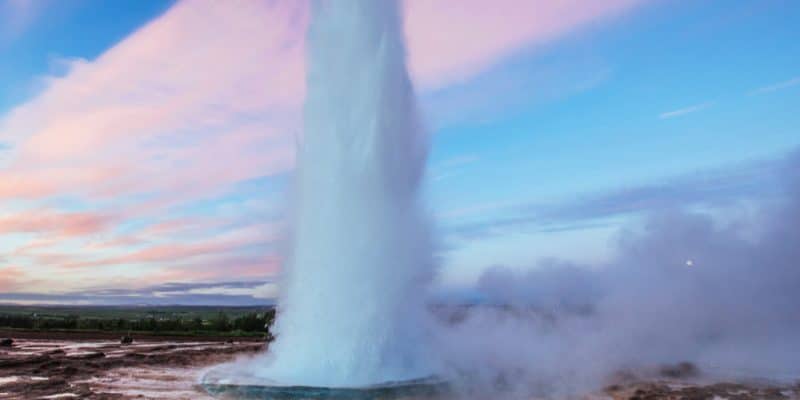 In the absence of a public drinking water supply in Eburru, Kenya's Rift Valley, people use geyser steam to obtain drinking water. And it works!

Eburru is a village located in the Rift Valley in northwestern Kenya. The small locality is best known for its volcano, Ol Doinyo Eburru, located nearby and still active. However, drinking water is scarce on the spot. Before, people used to consume water from Lake Naivasha. In fact, several other villages depended on this freshwater lake. In recent years, water has been polluted by agricultural waste.

Kenya Electricity Generating Company (KenGen), the country’s largest electricity producer, has helped villagers set up a system to pump water from the lake. But as it is untreated, villagers use it only for agriculture, in the dry season, or to water livestock. To obtain drinking water, they had to find other solutions. They could have found drinking water by digging wells. Problem, the volcanic soils are loose and the wells collapse very quickly. As an alternative, they then turned to geysers rather frequent in the volcanic region.

From steam to pure water

The geyser is a hot-water spring that gushes out at high temperature and pressure. It also and above all produces steam. And that’s what the people of Eburru are interested in. There are several steam sources over an area of 2 hectares. To exploit a source, it is necessary to obtain the approval of local authorities. Then you one has to dig 1.5 m to get more steam. And to exploit it, the populations manufacture exhaust pipes that lead to a huge elevated drum that collects hot water.

This is then cooled by a metal tube. To set up such a system, up to 5 million shillings, or nearly $49,000, was spent. “The water is clean and tasteless. We use it without any form of treatment to cook and drink,” says Mary Njeri, a village resident. “When it’s cold, there’s a lot of steam coming out of the ground and at that time we give water for free. In one day, a geyser can fill an 800-litre tank. During the drought period, we have to sell it because of the high demand. A 20-litre Jerry can of water is sold for 10 shillings, less than a penny. While the health authorities in the Nakuru region have validated this system, the only challenge for these populations remains the securitisation of the facilities. For the moment, they use simple padlocks.