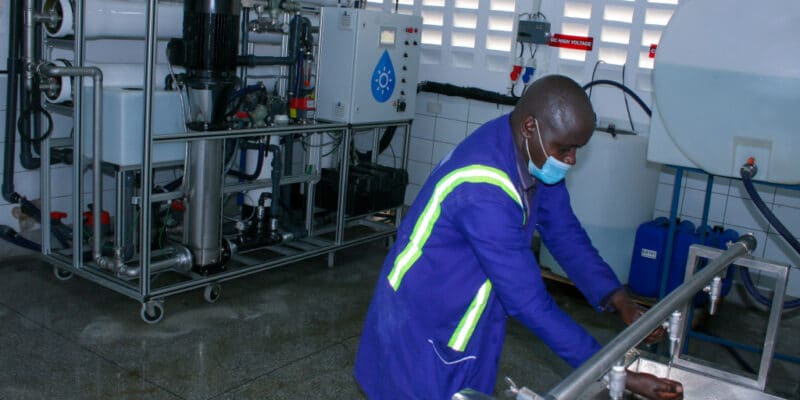 German start-up Boreal Light is commissioning desalination and wastewater treatment systems in several hospitals in Mombasa County, Kenya. The installations are part of a programme implemented in partnership with the Kenyan company WaterKiosk and the Deutsche Investitions- und Entwicklungsgesellschaft (DEG), the subsidiary of the German Development Agency (KfW). The programme will install 28 desalination systems for health facilities in Kenya and Tanzania.

The benefits of Boreal Light’s desalination and wastewater treatment systems deployment programme are starting to trickle down to Kenya. The German start-up has just delivered its first projects in Mombasa County. On March 14th, 2021, Hamed Beheshti, Boreal Light’s Managing Director, visited Mtwapa where he participated in the inauguration ceremony of a solar-powered water desalination system in the presence of the Archbishop of the Catholic Archdiocese of Mombasa, Martin Kivuva.

As part of its programme, Boreal Light plans to commission 23 solar desalination systems in Kenya and five in Tanzania. The company also provides systems that treat wastewater from health facilities. Such plants are important in hospitals treating Covid-19 cases on a daily basis. Untreated wastewater discharged into the environment could contribute to the contamination of local populations.

“The solar water desalination projects will offset more than 18,000 tonnes of CO2 per year, which is an excellent model for climate change mitigation practices in Africa,” adds Hamed Beheshti. Boreal Light is implementing the water supply programme in partnership with Kenyan company WaterKiosk. The programme is also supported by the Deutsche Investitions- und Entwicklungsgesellschaft (DEG). The development finance institution intervenes in the framework of the develoPPP.de programme initiated by the German Ministry for Economic Cooperation and Development (BMZ).