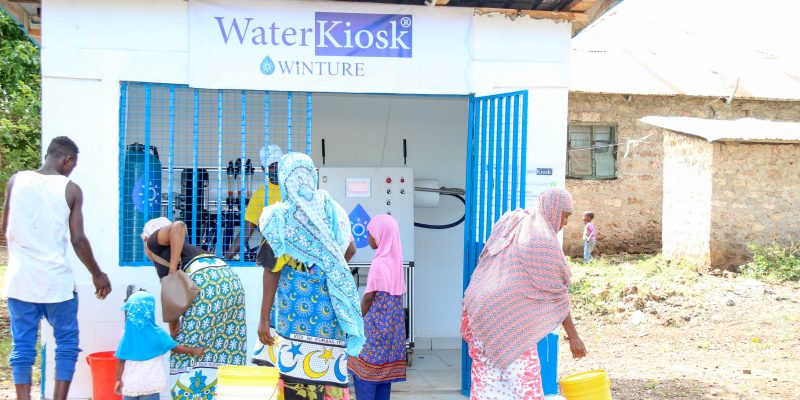 New drinking water kiosks designed by Boreal Light supply a school, a mosque, a vocational training centre, a tailoring shop and oil extraction facilities on the southern coast of Kenya. The drinking water is obtained from a new desalination system powered by a 15 kWh solar mini-grid. Called “Shimoni WaterKiosk”, the solution was installed by Kenyan start-up WaterKiosk Africa.

According to the start-up company Boreal Light, based in Berlin, Germany, the Shimoni WaterKiosk has a capacity of 2 m3 of drinking water per hour. The new installations are in addition to existing kiosks in Kenya that promote the use of brackish groundwater in a context of water stress.

Installation of 30 desalination systems in hospitals

Boreal Light has recently been supplying its desalination systems to Kenyan health facilities to improve water supply and at the same time accelerate the fight against Covid-19. Several installations have already been commissioned in hospitals in Mombasa County, Kenya in March 2021. A total of 23 systems will be installed in the East African country. Boreal Light also plans to install five desalination units in neighbouring Tanzania. Of the 28 kiosks, “seven will have a capacity of 10 m3 per hour and will be powered by 60 kWp solar photovoltaic systems. The other installations will have a capacity of 3 m3 per hour, with 11 kWp solar systems,” said Hamed Beheshti, Boreal Light’s managing director, at the launch of his project in March 2021. The two remaining desalination systems will be delivered to the Zanzibar archipelago in Tanzania.

The project, implemented in partnership with the Kenyan company WaterKiosk and Deutsche Investitions- und Entwicklungsgesellschaft (DEG), the subsidiary of the German Development Agency (KfW), will also make it possible to offset “more than 10 000 tonnes of CO2 emissions per year”, says Boreal Light. The German start-up has given itself until the end of 2021 to complete the supply of 30 desalination systems in the various areas concerned.