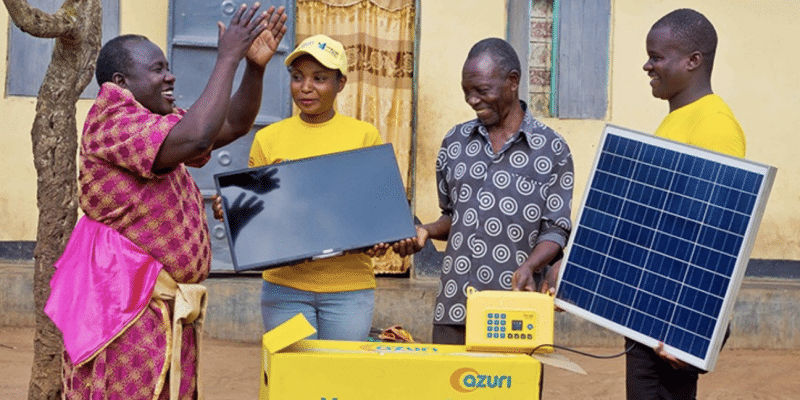 Three years after the launch of its PayGo TV product (a fully solar-powered television with an integrated 60-channel satellite) in Africa, the British company Azuri Technologies has decided to move up a gear. It recently launched the AzuriTV TV400 system in Kenya. This is a new solar-powered home entertainment system.

“It’s a new solar-powered home entertainment system. These are the three words Azuri Technologies uses to describe its new technology. Called AzuriTV TV400, the entertainment system was recently launched by the British solar home systems provider. Initially, the AzuriTV TV400 system will be deployed in disadvantaged areas in Kenya. The British company then plans to invest in all markets in Africa.

What is the added value?

The Azuri TV system, launched in 2017 thanks to a partnership between Azuri Technologies and Zuku, a provider of pay TV and broadband internet services in Kenya and Tanzania, combines a solar home system, 24-inch TV, a satellite dish and Zuku Smart+ entertainment with 48 TV channels and 21 radio stations, enabling African off-grid households to watch TV all day long, as well as for four to five hours every night.

With its AzuriTV TV 400, the British company goes one step further. The system has 80 Wp “frameless” solar panels. This makes them lighter and capable of self-cooling and self-cleaning, offering greater energy efficiency and simplicity to customers. The solar systems are equipped with a battery twice the size of existing Azuri products (160 Wh) and a new, highly efficient 32-inch television, allowing customers to watch TV all day and for at least 10 hours every night. AzuriTV TV 400 is also equipped with two, two spotlights, a rechargeable radio, a rechargeable torch and a phone charger (USB) with extra capacity for smartphones.

Thanks to this new system, African households will also benefit from a satellite dish and a subscription to the Zuku Smart package which offers more than 55 channels including all local content and the EDU channel.