Homepage » Jocelyne Landry Tsonang: « The circular economy must be formalised in Africa
This article is part of the dossier
WORLD CIRCULAR ECONOMY FORUM 2022 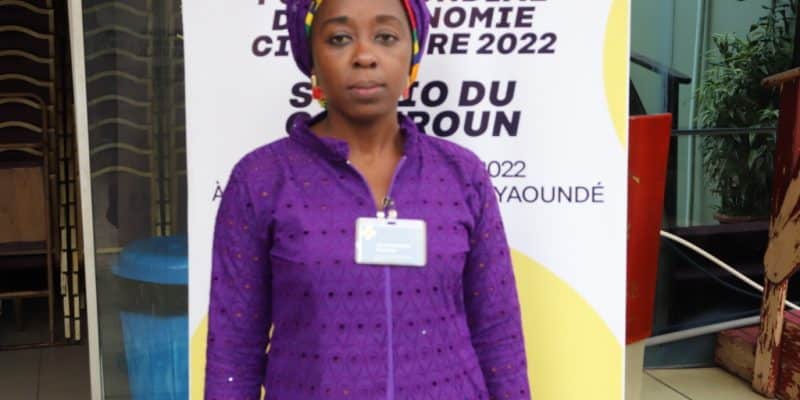 The World Circular Economy Forum (WCEF) takes place from 6 to 7 December 2022 in Kigali, Rwanda. Central Africa is taking part in this event, via a Studio organised in Yaoundé, Cameroon. On the stakes and other issues related to this forum, AFRIK 21 interviewed Jocelyne Landry Tsonang, the representative of the African Circular Economy Network (ACEN) in Cameroon and associate consultant for the ACEN Foundation.

WCEF2022 #3. Our series in partnership with the Finnish Innovation Fund Sitra.

The circular economy is an expression that is not necessarily part of the common language. It is opposed to the linear economy. What is the concrete difference between the two?

These are two diametrically opposed terminologies. The circular economy is an economic model in which matter is kept as a resource as long as possible. Here the elements work in a loop, the material returns to the system. Whereas in the linear economy, the pattern is to take the resource, use it and throw it away, thereby polluting the environment.

Kigali, the Rwandan capital is hosting the World Circular Economy Forum from 6 to 8 December 2022. This is the first time this event is being held on African soil. What are the challenges for Africa?

I would say that this is a very good opportunity for Africa. Because with the Covid-19 crisis and the Russian-Ukrainian war, we have realised how vulnerable our continent is. And yet by applying the circular economy, Africa would become less vulnerable, through self-sustaining systems. Today we continue to import chemical fertilisers, despite prices that have doubled and even tripled on the international market. This is a paradox, when we see the tons of organic waste that we send back into nature, at the risk of nature and our health. Instead of being a problem for us, this waste can be a source of wealth, because it allows us to keep our foreign currency by stopping importing chemical fertilisers that pollute our soils and water tables.

Read also-On the road to WCEF2022: Challenges and opportunities of a circular economy in Africa

So this edition of the World Circular Economy Forum, which is taking place in Africa, is really timely. It will also allow us to review our economic system, to ask ourselves the real questions, to see how to work together, to see how to strengthen South-South cooperation, in order to create economic systems that take into account the protection of biodiversity and the fight against climate change.

Are the economic context and the political framework that characterise most African countries conducive to the development of the circular economy in the continent’s cities, which are mainly faced with the headache of waste management?

Politicians have a very important role to play, because the political framework is a bit like the foundation on which the other actors build. That is why, through this World Circular Economy Forum, we have called on all categories of actors, because everyone has a part to play.

In your capacity as representative of the African Circular Economy Network in Cameroon, you are involved in the organisation of a studio in Yaoundé on the circular economy. What are the topics that will be discussed at this event?

We have focused on themes that are important in the Cameroonian and Central African context. We are addressing a theme on the importance of the circular economy in socio-economic growth. Because let’s not kid ourselves, in Africa we need this socio-economic growth first. We talk about the role of the private sector. Because the private sector has a very important role to play in the implementation of the circular economy. That is why we have invited the private sector to take part in this conference, to exchange and to see to what extent we can work together.

We are addressing the issues of Extended Producer Responsibility, which is still in its infancy in Cameroon, and whose legislation is not clear enough.

One of the things that will be discussed is how we can build on models that are already working, for example in South Africa or France. We are not asking to copy these models, but to adapt them to the local context.

The African Circular Economy Network advocates an inclusive approach to the transition to a circular economy. What does this mean?

The inclusive approach simply means that no one is left behind. We grow together. That’s why we talk about a just transition, because all categories of actors must work together, and grow together.