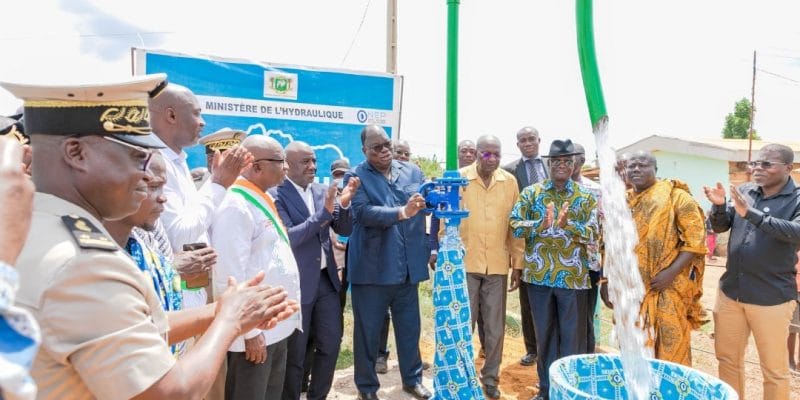 In Ivory Coast, the government is commissioning two new decentralized compact units (UCDs). Prefabricated by the Suez Group, the modular rapid deployment systems have been installed in Agnibilékrou and Bettié, two towns in the Indénié-Djuablin region, by the Ivorian company Franzetti.

The two decentralized compact units (UCD) were inaugurated on 8 and 9 April 2022 by the Ivorian Minister of Hydraulics, Laurent Tchagba. The Agnibilékrou DCU has a capacity of 2,000 m3 of drinking water per day.

From now on, the people of Agnibilékrou will receive up to 5,156 m3 of drinking water per day, compared to 3,156 m3 before the new UCD was commissioned. According to the Ivorian authorities, this is a temporary technical solution that will help fill the “severe” and “chronic” shortage of drinking water in this town of more than 70,000 inhabitants.

The new installation was designed by the French group Suez and installed by the Ivorian company Franzetti. The Ivorian government relied on a loan from Société Générale to finance the entire project, which was valued at nearly 1.3 billion CFA francs, or more than 1.9 million euros. Following this, the Ivorian Minister, Laurent Tchagba, launched the extension of the drinking water distribution network in the town of Agnibilékrou.

The second UCD serves Bettié, a town in the Indénié-Djuablin region in. The facility is capable of producing 2,000 m3 of drinking water per day. “This production will be added to the 180 m3 per day produced by the existing Bettié plant,” says Laurent Tchagba, the Ivorian Minister of Hydraulics.

The deployment of this other unit has cost the Ivorian government more than 1 billion CFA francs (more than 1.56 million euros). Following the inauguration of the Bettié UCD, the government plans to extend the city’s drinking water network to serve an additional 500 households. The work to lay the new pipes is expected to take six months, at a total cost of approximately 251 million CFA francs (over 389,000 euros).

The towns of Agnibilékrou and Bettié are benefiting from these systems, less than two months after the commissioning of another UCD in the Ivorian town of Séguéla. The installation has a capacity of 100 m3 per hour and can cover the drinking water needs of 200,000 inhabitants, particularly in the districts of Bobi-Diarabana, Dualla, Kamalo, Massala, Sifié and Worofla.

As part of the “Water for All” program launched in 2019 to strengthen access to drinking water in urban and rural areas, the Ivorian government has already deployed 40 UCD units in 32 cities for a total capacity of 92,000 m3 per day.