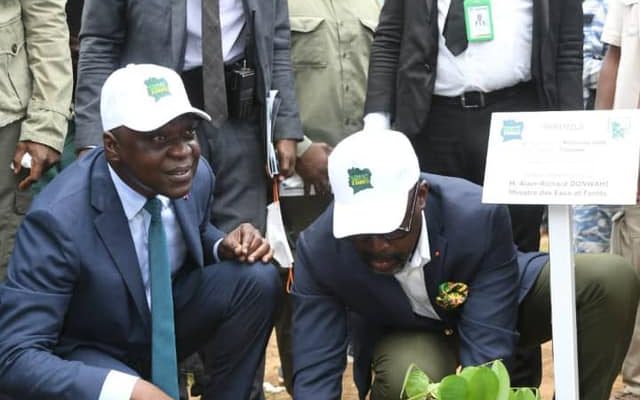 The third national reforestation operation in Ivory Coast for the year 2021 is entitled "1 day, 50 million trees". For the Ivorian government, this year's objective is to plant 50 million trees, in order to contribute to the restoration of a highly degraded forest cover. The West African country has lost 90% of its forest area over the past 60 years.

The reforestation target set this year by Ivorian authorities is 50 million trees. Hence the name of the operation, “1 day 50 million trees”, officially launched on Friday, October 29th, 2021 in the forest of Anguédédou, which has become for the last two decades one of the last forest relics of the city of Abidjan, the economic capital of Ivory Coast.

For this year, the objective of the national reforestation operation is very ambitious. It is ten times higher than last year’s objective “1 day 5 million trees” and fifty times higher than the objective set in 2019 during the first edition, “1 day 1 million trees”. Thus, to achieve this year’s goal, the planting of trees started on June 1, took place without interruption on all regions and departments of Ivory Coast, depending on the rainy season. The partial assessment to date indicates that 28.5 million trees have been planted, a completion rate of 57.08%.

The Ivorian Minister of Water and Forests also called on all components of the population to mobilize to achieve the goal of 50 million trees planted before the end of the rainy season. Pupils, students, defence and security forces, craftsmen, rural communities, civil servants, city dwellers, etc. Everyone is called to plant, each, a tree.

The member of the government did not fail to emphasize the need for reforestation. “The consequences of the disappearance of forest resources are largely responsible for global warming, which is responsible for extreme climatic phenomena with, on the one hand, uncontrolled floods, severe droughts, melting of glaciers, rising sea levels, drying of soils and their impoverishment, with the corollary of population migrations,” said Alain-Richard Donwahi, Ivorian Minister of Water and Forests.

According to the results of the National Forest and Wildlife Inventory (NFWI) presented in July 2021 in Abidjan, Ivory Coast has lost 90% of its forest area over the last 60 years, becoming one of the African countries with the highest annual deforestation rate.

The same study mentions that at this rate of deforestation, there will be less than 2 million hectares of forest left in 2035 in Ivory Coast and none left in the southern part of the country, except for protected areas. Today, the Ivorian forest cover is estimated at 2.97 million hectares, or only 9.2% of the national territory. The government’s objective is to increase forest cover to at least 20% of the national territory by 2030.