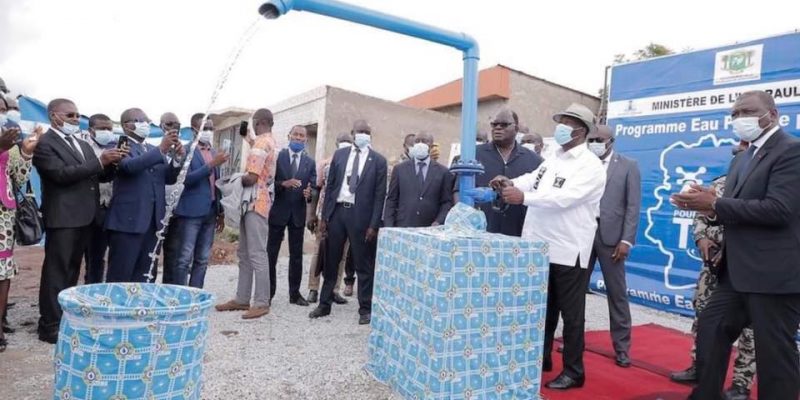 The Ivorian government has just inaugurated the first phase of a drinking water supply project in the localities of Sinfra and Gagnoa, in the centre-west of the country. The new facilities provide water to 35 villages in the two localities.

As the country lives to the rhythm of the first round of the presidential election of October 31st, 2020, the Ivorian head of state has just completed a tour of the Marahoué region. A visit during which Alassane Ouattara presided over a ceremony to inaugurate the first phase of a drinking water supply project financed in part by a loan from France.

“While waiting for the completion of the construction work on the Sinfra water tower, an emergency solution has been devised to provide rapid relief to the people who are experiencing a serious water shortage. This involves connecting Sinfra directly to the Bandama River from Zambakro. And this solution benefits 35 villages located on the Zambakro – Sinfra-Gagnoa axis”, explains Laurent Tchagba, the Ivorian Minister of Hydraulics.

The construction of the new drinking water supply facilities is part of a larger project to supply 120 villages by the end of 2020. According to the Ivorian presidency, the second phase of the on-going project will see the construction of nine water towers to supply 72 villages.

The Ivorian government is also planning a third phase that will lead to the laying of 400 km of drinking water distribution pipes. This other axis will make it possible to create 1,500 social connections. According to the Ivorian presidency, the project, the first phase of which is operational, will provide access to drinking water for more than 412,000 people, including more than 152,000 in the Sinfra department. The cost of this drinking water supply project is estimated at 73.7 billion CFA francs, or 112.3 million euros.

The project is part of the “water for all programme” launched by the Ivorian government in 2017 to speed up the construction of drinking water production facilities throughout the country, with a total investment of 1,320 billion CFA francs (more than 2 billion euros). Through the programme, the Ivorian government plans to achieve a 95% rate of access to drinking water in the country before the end of 2020.

IVORY COAST: Coliba bets on kiosks for the collection of plastic waste