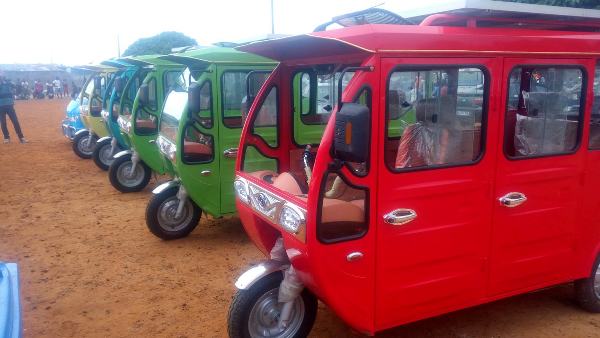 Jacqueville is the first city in Ivory Coast to use a green means of transport. For few months now, the municipality has been testing solar tricycles to replace old transport vehicles better known as "bush taxis" for a few months.

About 60 km from Abidjan is Jacqueville, with a population of more than 32,000. The urban means of transport there remains the famous “bush taxi-taxi”, a kind of dilapidated car, locally known as “wôrô-wôrô”. These are the same polluting cars that are used to transport goods and people to the large city of Abidjan.

In Jacqueville, the city council has decided to tackle the pollution generated by such mode of transport. She is testing solar tricycles imported from China. Everything starts from Marc Togbé’s journey into the Middle Kingdom. He then had the idea of adapting solar panels and batteries to tricycles. Back home in Ivory Coast, he decided to promote the means of transport, particularly in Jacqueville. On site, he proposes the solution to the municipality, which gives its approval for the experiment.

The support of the Jacqueville city council

Initially, two tricycles were put into service, for the movement of the population. Today, with the help of the city council, eight others are in circulation. These tricycles, which look like carts, are 2.7 m long and 2 m high. Solar panels are installed on the roofs of vehicles. They can charge 6 12-volt batteries, for an average range of 140 km.

To launch his project, Marc Togbé received the support of Balla Konaté, a businessman from the region. The alternative transport start-up already employs 20 people; drivers and mechanics and the population embraces this new service. “It’s nice, for quicker rides,” says a Jacqueville resident in a report on francophone television TV5 Monde. “From six in the morning, we are on the job to finish around 10 p.m. and sometimes even midnight, especially during the weekend,” explains Philippe Aka Koffi, a solar tricycle driver. For him, people are also attracted by the price of a trip, insofar as it costs 100 CFA francs (15 cents of euro) instead of 200 CFA francs, for the “wôrô-wôrô”.

The business is going so well that Marc Togbé, with his partner, businessman Balla Konaté, plans to extend their service to other cities in Côte d’Ivoire. The cities of Odienné in the northwest and Korhogo in the north are already in the limelight.