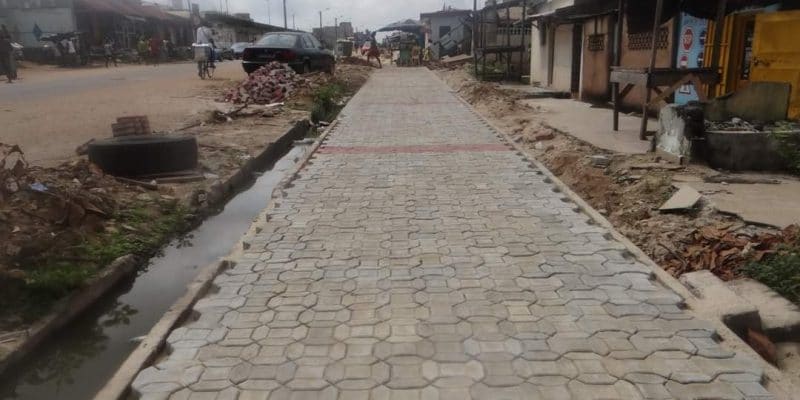 The Ivorian company Manage & Paste has just completed the laying of 200 m² of paved walkways at the Wassakara market in Yopougon, Ivory Coast. The construction materials were made from plastic waste. The initiative is funded by Nestlé Ivory Coast, the food subsidiary of the Swiss multinational Nestlé.

Nestlé’s commitment to reducing plastic pollution in Ivory Coast is bearing fruit. Its Ivorian subsidiary recently inaugurated a project to create 200 m2 of paved walkways at the Wassakara market in Yopougon, one of the 15 communes in the Abidjan district of Ivory Coast.

The project was implemented by the local company Manage & Paste, which specialises in waste recycling. The company used the solid waste collected during the “Au marché je trie mon plastique (At the market I sort my plastic)” operation, which it then transformed into paving stones. These building materials are cheaper than concrete paving stones. Between 2020 and 2021, the operation has enabled the collection and recycling of 60 tonnes of plastic waste in Yopougon, particularly in the Wassakara, Sicogi and Selmer markets, and the creation of 15 jobs for collectors and supervisors.

A positive impact on the environment

By transforming plastic waste into paving stones, Nestlé is reducing the pollution of soil and water by this non-biodegradable material, more than 90% of which is made from fossil fuels, according to the international organisation Greenpeace. The Swiss group’s objective for 2025 is to reduce to 100% the proliferation in the environment of its recyclable or reusable packaging in Côte d’Ivoire.

In addition to the “Au marché je trie mon plastique” project, which was deployed in the councils of Treichville and Yopougon, Nestlé supported the “Collecteurs indépendants” project in Abobo and Cocody, as well as the “Plastock” project, which helped reduce plastic pollution in the Abidjan council of Port-Bouët. In total, 587 tonnes of plastic were collected by Nestlé in Abidjan during 2020. The district alone produces 288 tonnes of plastic waste per day according to AfricWaste, a PET plastic bottle collection initiative launched by the French group Veolia.