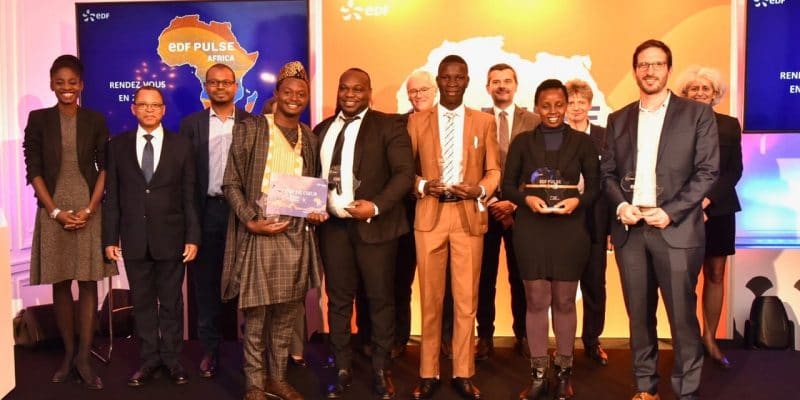 The EDF Pulse Africa final was held in Paris on November 21, 2019. The start-up from Ivory Coast won the first prize, followed by Energy Cycle (Togo) and Hydrobox (Kenya) respectively.

Enthusiasm wrapped up on the evening of Thursday, November 21, 2019, when the jury announced that the start-up Lifiled was the winner of the EDF Pulse Africa. The young company stood out from the other 9 finalists with its 3-in-1 solution that consists of providing off-grid electricity, Internet and educational content on agricultural know-how to rural populations. The second and third places went to the Togolese start-up Energy Cycle and the Kenyan company Hydrobox respectively.

The second winner brings a solution that makes it possible to use the energy produced by two-wheeled vehicles to recharge small devices, such as mobile phones and rechargeable lamps. Energy cycle is designed to easily attach to motorcycles and other two-wheeled vehicles. The young Kenyan company manufactures and installs mini hydroelectric power plants with a production capacity ranging from 100 KW to 5 MW. Hydrobox is designed to be connected to traditional electricity distribution networks. This solution also provides power to off-grid grids, and facilitates access to electricity in rural Kenya.

Ivory Coast and South Africa in the spotlight

The special EDF Boost prize was awarded to Plentify. This company transforms apartment water heaters into smart batteries. The batteries are recharged when electricity is available in abundance. This energy is then redistributed in case of high demand. A solution that allows households to save nearly 50% on their initial electricity consumption.

Finally, the young company Clean Energy Services was awarded the ESCP Europe “coup de coeur” (favourite) prize. This structure brings off-grid power generation solutions to the market. They are used to power freezers and refrigerators in remote locations. The kits marketed by Clean Energy consist of solar panels, a refrigerator and LED bulbs that are energy efficient.

The 2019 edition of the competition brought together startups and SMEs with fewer than 50 employees. For this edition too, the organisers have introduced a preselection system at national level. The EDF Pulse Africa Tour was held in seven African countries, including Cameroon, Ivory Coast, Togo, South Africa, Ghana, Morocco and Senegal. Four partners were involved in the organisation of this competition, including Boukarou in Cameroon, Energy Generation in Togo, Motion in Senegal and Impact Hub in Ghana.

Initially, 536 participants from 26 African countries were registered and only 10 were selected for the final phase. There has been an increase of around 24% compared to last year, when 434 projects from 24 countries took part in the competition.