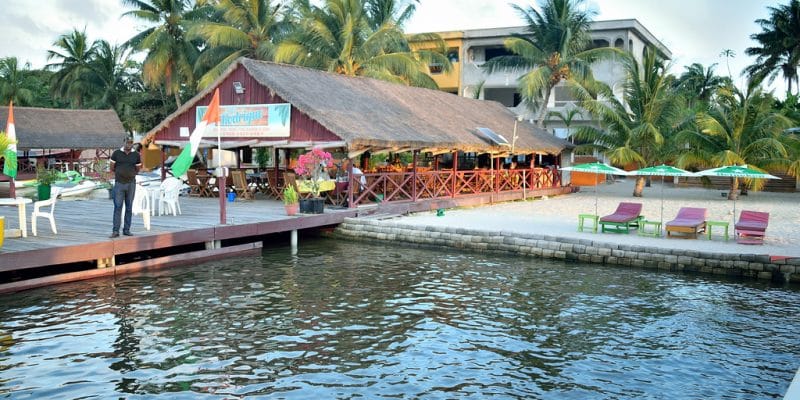 The 1000 m2 floating island built by Éric Becker, a French restaurateur residing in Ivory Coast, is an attraction for many curious people. It houses a hotel restaurant and is placed on a surface built with plastic bottles. It's an original idea that stirs a lot of curiosity.

It’s an island of a different kind. Not only because of its floating nature, but also because of its basic material: plastic waste. The artificial island of 1000 m2 built by the Frenchman Eric Becker is a real curiosity is based on nearly 700,000 plastic bottles and other waste that has been recovered in Abidjan, the economic capital of Ivory Coast. The island is located in the centre of the Abidjan lagoon, between Bietry and Vridi, two Abidjanese districts. And as its author confirms in an interview with the French Press Agency (AFP), “it is really an artificial island that floats. And it can be moved”.

To make it happen, Eric Becker collected everything that was floating: plastic bottles, polystyrene scraps, tap shoes, etc. It was a laborious exercise that eventually developed into an expertise in the matter, which led to the new name given to him by the local inhabitants: “Éric Bidon” meaning “Eric plastic jug”. Eric says he, “bought bottles from people, and recovered others from the lagoon. Over time, he learned to follow the wind and find out where all the waste is concentrated.”

The buildings on the island were built using cages made of plastic. They were then covered with wood and a light layer of cement. The whole thing gives the impression of a wooden construction, with plastic waste simply serving as land. In addition, a 260-metre long circular bridge serves as a shoreline for visitors’ boats that want to dock. The total weight of the unit is 200 tons. To supply the building with electrical energy, the “engineer” had solar panels and a generator installed. For drinking water, pipes have been installed to connect the building to the ground. The island has a bar-restaurant, two swimming pools, a small bridge and several bungalows.

The young inventor hopes to see his idea taken up in other lagoons around the world, in order to give a second life to waste and thereby reduce environmental pollution. Still addressing AFP, he did not fail to express the satisfaction felt at the end of this work. “The beauty of this idea is that we transform something negative, pollution with plastic bottles, into something positive.”

Plastic waste accounts for up to 12% of Abidjan’s waste. A situation that seems to concern the leaders. In fact, a project is being carried out with Unicef to build a plastic waste recycling plant. The initiative will facilitate the massive production of plastic bricks to ensure the construction of 500 schools by 2021.