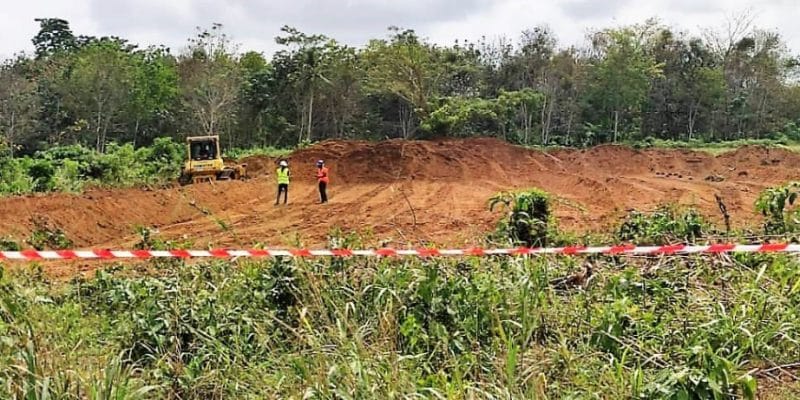 In Ivory Coast, Biovea Energies, the company implementing the Ayébo biomass power plant construction project, is launching work in the Aboisso region. The plant, which will have a capacity of 46 MW, will use oil palm waste as fuel.

The construction project of the Ayébo biomass power plant is now underway. Work on the project was launched recently near the town of Aboisso in southwestern Ivory Coast, following an information session on the start of activities and community awareness on environmental and social (E&S) policies.

Earthworks began on the site on Thursday, February 24, 2022. This site will house a biomass plant that will produce electricity by incinerating oil palm waste. This agricultural waste recovery project involves several companies, including Movis Ivory Coast, a company specializing in logistics and supply chain. Movis International’s subsidiary will handle the logistics and transportation of the biomass from the collection sites to the Ayébo plant.

The agricultural waste will be collected for 25 years from 12,000 farmers. The Ayébo power plant will have two units of 23 MW each. The total capacity of the facility will be 46 MW. The electricity will be produced by disposing of 480,000 tons of oil palm waste. Biovea Energies, which is implementing the project, is 40% owned by Electricité de France (EDF) and 36% by Meridiam, a French company specializing in the development, financing and management of infrastructure projects. Biokala, the subsidiary of the Ivorian industrial group SIFCA, holds the remaining 24%. Biovea has already signed a 25-year power purchase agreement (PPA) with the Compagnie Ivoirienne d’Electricité (CIE).

For the entire project, Biovea will invest 129 billion CFA francs, nearly 200 million euros. The company will rely on loans from Proparco, the private sector financing arm of the French Development Agency (AFD), as well as financing from the Netherlands Development Finance Corporation (FMO). The Ayébo plant is also receiving funding from the Private Infrastructure Development Group (PIDG), as well as from its subsidiary Emerging Africa Infrastructure Fund (EAIF). The plant is expected to begin commercial operations in 2023.