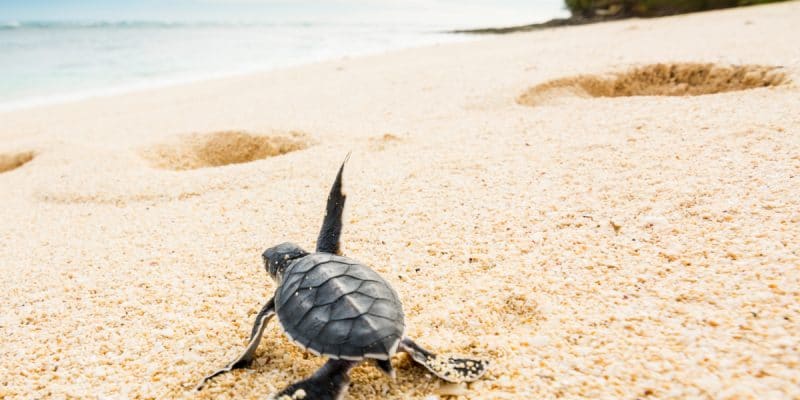 The seaside town of Grand-Béréby, located 378 km from Abidjan in south-west Ivory Coast, is a haven for sea turtles. They reproduce there in complete safety, in the first and only marine protected area in Ivory Coast.

Everything is like a pilgrimage. Every year, between September and February, adult female turtles emerge from the sea at nightfall to lay eggs on the beach of Grand-Béréby, a seaside town in southwestern Ivory Coast. After laying their eggs, the female turtles return to the sea, leaving their eggs under the protection of members of the non-governmental organisation (NGO), called Conservation des espèces marines (CEM).

“We protect the adult turtles that lay eggs on the beaches and after they lay, we collect the eggs and keep them on land in hatcheries until they hatch before releasing them to their natural environment, the sea,” explains Wilfried Klako, an eco-guard working for CEM. The turtle population that breeds on Grand-Béréby beach consists of three species. These include the green turtle, the leatherback turtle and the olive ridley turtle. In 2021, there were 700 protected female turtles giving birth to more than 60,000 hatchlings per year in Grand-Béréby. In 2020, the protected area recorded 36 sea turtle nests compared to 12 in 2010.

The only marine protected area (MPA) in Ivory Coast

To strengthen the protection of marine turtles in Grand-Béréby, CEM has recruited and trained 30 young eco-guards through the 13 village communities living in the sub-prefecture of Grand-Béréby. According to CEM, funding for conservation activities and community support in the protected area has already cost nearly US$850 000, an amount mobilised from several partners including the Rainforest trust, the Fish and Wildlife Society (FWS), Darwin initiative, the International Union for Conservation of Nature (IUCN), the Global Environment Facility (GEF), Birdlife and the Sifca Foundation.

Grand-Béréby beach is the first and only marine protected area (MPA) in Ivory Coast, created on 21 December 2020. It covers an area of approximately 2,600 km² and includes the villages of Roc, Mani, Kablaké, Pitiké, Dahoua, Taki, Ménolé, Ouro and Pétit Digboé, as well as the surrounding localities.