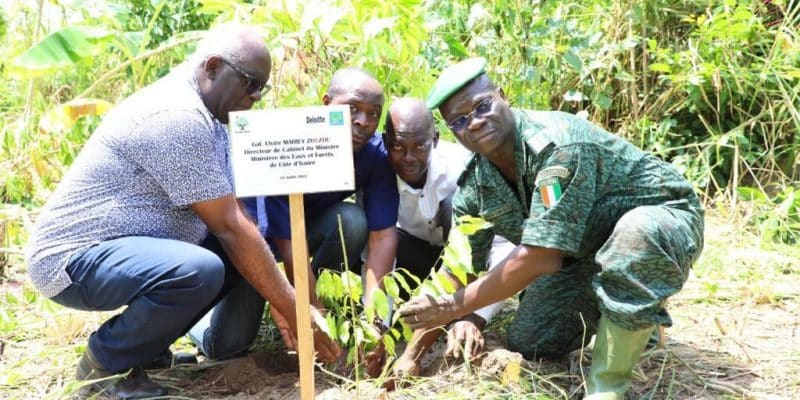 As part of its CSR (Corporate Social Responsibility) approach, the National Institute of Administrators of Ivory Coast (Inad-CI) has just completed the reforestation of 19.5 hectares in the classified forest of Audouin located in the town of Jacqueville northwest of Yamoussoukro. The initiative aims to prevent drought through the restoration of forest cover.

According to the non-governmental organisation (NGO) Mighty Earth, agriculture has caused in 2018 the disappearance of 14,000 hectares of forest in Ivory Coast, the equivalent of 15,000 football fields (over what period?). In order to reverse this trend, the National Institute of Administrators of Ivory Coast (Inad-CI) recently reforested 19.5 hectares of the Audouin classified forest located in the council of Jacqueville, 56 km from Abidjan.

The initiative, which is part of the “Green Project” launched by INAD-CI in 2021, will contribute to the reconstitution of the national forest cover (estimated at only 9.2% by the Ivorian authorities) with the support of the Ivorian Ministry of Water and Forests. Other private companies are also participating in this operation. This is the case of the accounting firm Deloitte Ivory Coast, which will reforest 75 hectares by 2026 in the seaside town of Jacqueville.

The “Green Project”, which originally aimed to reforest 10 hectares of land annually until 2032, has already restored 39.6 hectares of forest in just two years thanks to the mobilisation of 400 volunteers. This project, coordinated by Senator Viviane Zunon-Kipré, is helping to combat the conversion of forests to agricultural land in this West African country where agriculture occupies 65% of productive land, according to the United Nations Food and Agriculture Organisation (FAO).

Read also-SDGs: eight years before the deadline, how is Ivory Coast doing?

To remedy this drought-prone situation, the Ivorian government has launched the “one day one million trees” operation and the “one day 50 million trees” campaign in 2019. The two initiatives, which aim to eventually plant more than 28 million trees throughout the country, have already been implemented in the Anguédédou classified forest to the north-east of Abidjan and in the Banco National Park, which is considered the green lung of the Autonomous District of Abidjan.