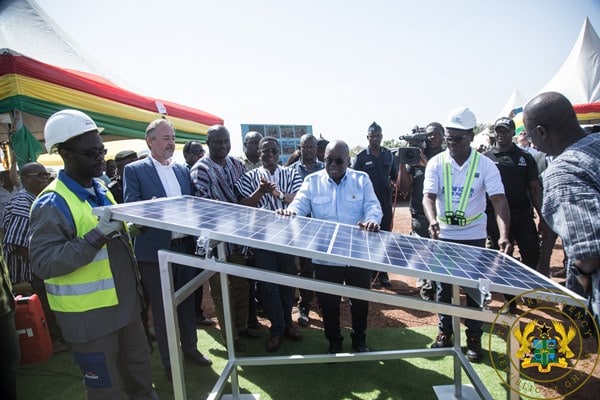 The Ghanaian government has recently launched the construction of two photovoltaic solar power plants in the Upper West Ghana region. Financed entirely via a loan from the Kreditanstalt für Wiederaufbau (KfW), the two plants will have a capacity of 17 MWp.

This is good news for the people of northwestern Ghana. Their electricity supply will be improved in a few months’ time thanks to two solar photovoltaic power plants whose construction has been launched by the Ghanaian Head of State, Nana Akufo Addo, in the Nadowli Kaleo district of Kaleo.

It is in this locality that the larger of the two power stations will be built. The solar panels and inverters will be installed on 20.4 hectares of land. The Kaleo solar power plant will have a capacity of 13 MWp. The electricity will be transmitted via a medium-voltage line that will connect to the 161 kV substation of the Ghana Grid Company (GRIDCo) in Wa. The substation is located only 15 km from the Kaleo Solar Power Plant.

The second solar power plant is being built in Lawra, again in the Upper West Ghana region. The plant, which will have a capacity of 4 MWp, will occupy an area of 6.13 hectares. It will be connected to the grid via a medium-voltage transmission line that will be connected to a 34.5 kV substation in Lawra. The Kaleo and Lawra solar power plants will each have a “fully equipped” control building.

The construction of these two plants will be completed in June and December 2020 respectively. They will prevent the emission of 7,400 tonnes of carbon dioxide per year, according to the Ghanaian government. Once completed, the two projects would generate enough energy to power about 32,000 households and increase the geographic distribution of power generation in Ghana, “he said. Kaleo’s power plant will also become the first grid-connected solar station in the Upper West Ghana Region and will contribute to its development,” said President Nana Akufo-Addo at the groundbreaking ceremony.

A project to support the production of a hydroelectric power station

The Kaleo and Lawra solar power plant construction project is being carried out by the Volta River Authority (VRA). It is a public body established by the Ghanaian government to develop, deploy and sustainably use the resources of the Volta River and other renewable energy sources found in the river basin. The implementation of its solar project will require an investment of more than $25 million. The project is entirely financed by the Kreditanstalt für Wiederaufbau (KfW), the German development agency.

The two solar power plants will help to stabilise the power grid in the Upper West Ghana region. “The project is a perfect complement to the Akosombo dam. During the day, the solar power plant would be used to generate electricity, which would enable the dam to be filled so that it can be used at night when we cannot rely on solar power,” explains Ghana’s Minister of Energy, John Peter Amewu.

The Akosombo Dam is being built in the Akosombo Gorge on the Volta River, forming the lake of the same name. Water from the reservoir is used to drive the turbines of a hydropower plant with a capacity of 1,020 MW, one of the largest hydropower plants in West Africa.