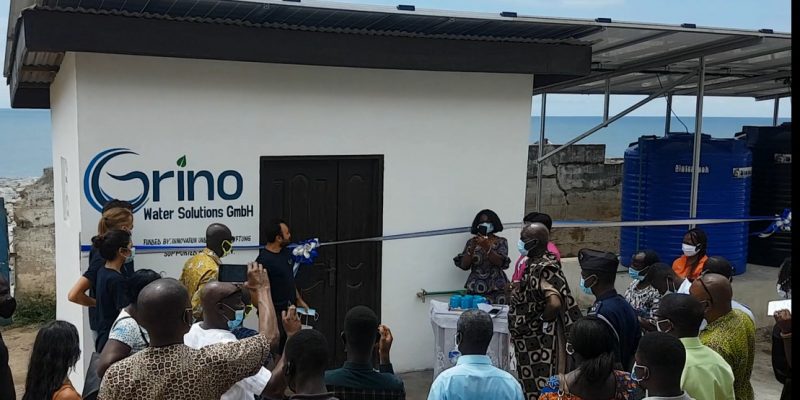 At least 1,000 people are currently benefiting from a desalination system that has just been installed in the coastal city of Cape Coast, Central Province, Ghana. This is the result of a pilot project implemented by Grino Water Solutions, a start-up based in Nuremberg, Germany.

The system consists of an 8m3 per day borehole that pumps salt water. It is powered by a photovoltaic solar system consisting of 24 panels. The installation, which has a capacity of 8 kWp, also powers the desalination system, which is capable of supplying 3,000 litres of drinking water per day.

Grino Water Solutions developed this pilot project in partnership with other companies, including Energiebau Sunergy Ghana, which installed the solar system, and Safeflex Way Water Technologies, which carried out the drilling. The desalination system installed in Cape Coast benefits two schools.

Water for two schools and the local population

Four water tanks were installed separately at Philip Quaque Public School and Jacob Wilson-Say School. “One additional tank is exclusively for the local community. Approximately 30 percent of the water production will be sold to the population at an affordable price to offset small maintenance costs and ensure the sustainability of the project,” explains Grino. Its facilities benefit 600 high school students and almost 400 people living around the two schools.

As part of its pilot project, the start-up received funding from the Innovation und Zukunft Stiftung, a foundation based in Nuremberg that promotes innovation. Grino, which joins the ranks of Africa’s leading provider of drinking water supply solutions, plans to partner with local communities and other companies to disseminate its desalination technology on a continent where three out of four people do not yet have a secure source of drinking water supply, according to the United Nations (UN).