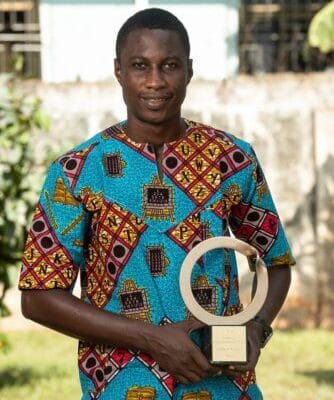 The Ghanaian Ezekiel Chibeze wins the Goldman Prize. It rewards people who strive to protect the environment, often at great personal risk.

His name may not ring a bell, but from now on Ezekiel Chibeze is associated with environmental resistance. He received the Goldman Award for his commitment to environmental protection in Ghana. As a direct result of Ezekiel Chibeze’s 4-year grassroots campaign, Ghana’s Minister of Environment has cancelled the construction of a 700-megawatt (MW) coal-fired power plant and an adjacent port for coal imports. The Aboano coal-fired power station was to be the first of its kind in Ghana.

For the record, coal is the world’s most polluting and least sustainable source of electricity, even though it continues to provide 27% of the world’s energy and 38% of the world’s power generation. Fossil fuel-based electricity is the main contributor to the increase in carbon emissions, accelerating the phenomenon of climate change.

National Coordinator of 350 Ghana Reducing Our Carbon (350 GROC), a subsidiary of the environmental NGO 350.org, Ezekiel Chibeze, 40, has also established the Strategic Youth Network for Development, an organisation that uses the power of youth to achieve environmental and social change in Ghana. For more than a decade, Ezekiel has been raising awareness among Ghanaian youth on issues of sustainability and climate change. He is committed to empowering the next generation of environmentalists and making their voices heard, applying the motto “leave no one behind”.

In 2013, upon learning of the proposed coal-fired power plant and port at Ekumfi, one of Ghana’s 20 districts, Ezekiel and 350 GROC started a campaign to raise awareness of the risks inherent in this project for the Ghanaian population. They formed a coalition with youth organisations to organise press conferences and interviews. The coalition also launched a social media campaign and produced explanatory materials on coal and Ghana’s energy future.

Initially, the authorities dangled the promise of jobs and economic opportunities from the coal project to community members. For them, environmental concerns were less of a concern than the struggles for basic necessities. But through awareness raising, Ezekiel encouraged communities to realise the danger of coal through videos on the environmental impacts of coal in other communities.

Finally, in February 2019, the Ghanaian government published the Renewable Energy Master Plan, a comprehensive strategy with energy targets to be achieved by 2030, signifying its commitment to renewable energy.