Homepage » GABON: the oil spill exasperates the inhabitants of Étimboué in the west of the count

GABON: the oil spill exasperates the inhabitants of Étimboué in the west of the count 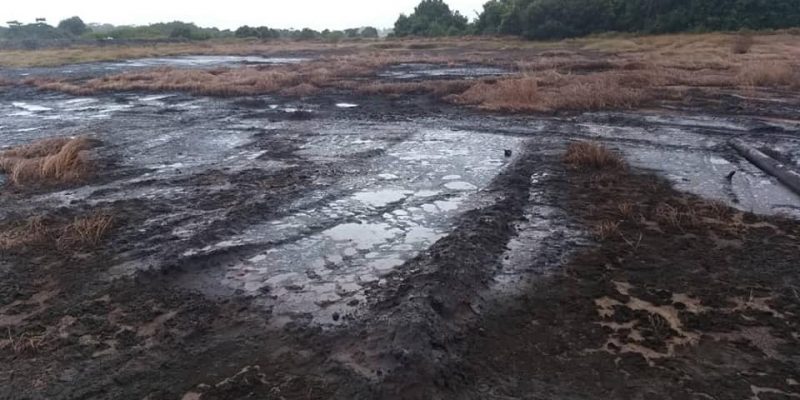 The Étimboué oil zone in western Gabon is the object of an ecological disaster. In an alert launched on the internet a few weeks ago, the inhabitants of this locality present the oil spill and the oil spills, which have polluted water and land, making agriculture and fishing almost impracticable.

“Étimboué or the dictatorship of oil” is the title of a 46-minute video published on Facebook on November 7th, 2020 by the inhabitants of Étimboué. In this peninsula of about 5,700 souls, located in the west of Gabon, large-scale oil pollution is a cause for concern. “For years now, there have been oil leaks all over the place. They spread throughout the area during the rainy season, when the polluted areas are flooded and the water carries toxic substances everywhere. My crops are gradually losing yield, so I need more water to grow them, about 50 per cent more than two years ago,” says Lydie Rebela, a 55-year-old farmer who has lived in the area for 30 years.

In this video, the fishermen’s complaints are also voiced. The water has been polluted by crude oil leaks. “In 2012, there was a big pollution in the Nkomi lagoon, and many dead fish were found floating on the surface of the water. Since then, it is as if the fish have fled the area. Previously, you could easily catch eight kilos in a day. Today, it is difficult to bring back two or three kilos” deplores fisherman Yves Onanga, founder of Brainforest and president of Gabon Environnement.

Perenco has not always responded to the charges against him

The damage, which is denounced by the oil pollution alert issued by the inhabitants of Étimboué, is attributed to the oil company Perenco, which extracts nearly 95,000 barrels of oil per day in the area. And this is done through dilapidated installations, as Lydie Rebela points out: “These leaks are mainly the result of old pipelines installed some forty years ago, which are regularly pierced. Some pipelines are located at the bottom of the water, others are buried, and others are laid on the ground. There are also some very old wells, in poor condition, which leak and create spillage”.

Joined in their fight by several environmental protection organisations such as the Réseau libre des organisations pour la bonne gouvernance au Gabon (ROLBG) and Brainforest, the populations are demanding reparation. “We will go all the way to the international level to force them to respect the rights of the people and especially environmental rights,” guaranteed environmentalist Marc Ona Essangui.

These demands and accusations are met with a block of silence. So far, neither Perenco nor the government authorities have responded to the concerns of the populations and even less to questions from the media.

The Étimboué oil zone has been exploited by Franco-British company Perenco since 2018, when it bought out the shares of French company Total. For more than forty years, the company has specialised in the cost-effective exploitation of end-of-life wells…

And the end of its activities in these places is not for tomorrow. In February 2020, the Gabonese government awarded Perenco three oil licenses covering a total area of 5,161 km2 in Étimboué, for a period of 8 years. Wholly owned by the Perrodo family, Perenco is chaired by François Perrodo, one of France’s youngest billionaires.