GABON: climate change is starving elephants in the Lopé Park 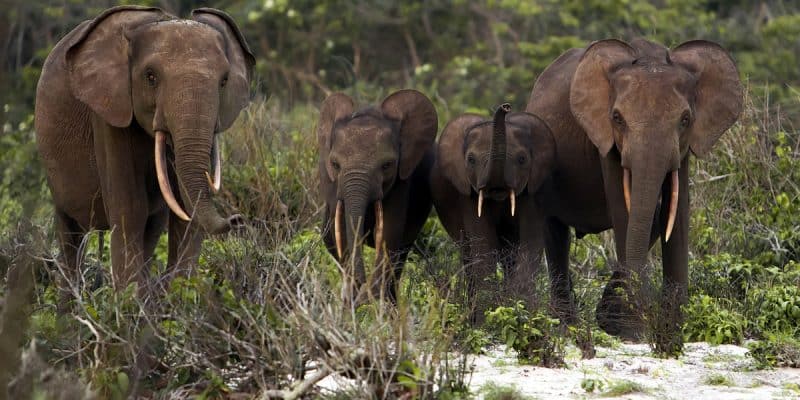 According to a study published in the journal Science, the amount of fruit that forest elephants feed on has fallen by 81% in the space of 30 years in Gabon's Lopé National Park. This deprivation of food due to rapidly changing climatic conditions has led to a weight loss of around 10% in fruit-eating forest elephants since 2008.

A study highlights the harmful effects of climate change on the lives of elephants in the Lopé National Park, located in central Gabon. Entitled “The long-term collapse of fruit availability in the megafauna of Central African forests”, the study, published on September 24th, 2020 in the British journal Science, reveals that over 30 years, from 1986 to 2008, the amount of fruit observed in the Lopé National Park fell by 81%.

This result was obtained by accessing monthly the presence of flowers, ripe or green fruits in the canopy of a thousand trees comprising 73 different species, 14 of which make up the bulk of the elephants’ diet. The report’s authors, researchers from the University of Stirling (UK), also examined a database of 80,000 photos taken by researchers or visitors to the Lopé Park over the last 20 years, and concluded that elephants had lost more than 10% of their body mass over the last decade studied. “We found that the likelihood of seeing flowers and fruit has dropped significantly in the park. On average, elephants and other animals found ripe fruit on one in ten trees in the 1980s, but now they have to look for more than 50 to find it,” write Emma Rush and Robin Whytock, who conducted the study.

A consequence of global warming

The decline in fruit production from trees in the Lopé National Park is attributed to the rapid variation in climatic conditions in the region. This is reflected in a decrease in rainfall and an average rise in minimum temperatures of about 1°C since the late 1980s. “The flowering of the trees is highly dependent on the level of minimum temperatures. Beyond a certain threshold, it does not start”, explain the researchers, before concluding that “it is likely that elephants, great apes or the many birds that feed on the fruit have suffered”.

The results of this study have been described as worrying by the Gabonese Minister of Environmental Protection. “It is alarming that climate change is causing forest elephants to starve and may be forcing them to leave the forests to approach villages in search of food, causing them to ravage plantations,” said Minister Lee White.

The results of this study are all the more worrying as elephants already face other threats such as poaching, hunting and deforestation. According to the “Great Elephant Census”, the largest census of African elephants published in 2016, these pachyderms have declined by 60% between 2002 and 2011 in Central Africa and their decline continues at a rate of 8% per year, the main cause being poaching.