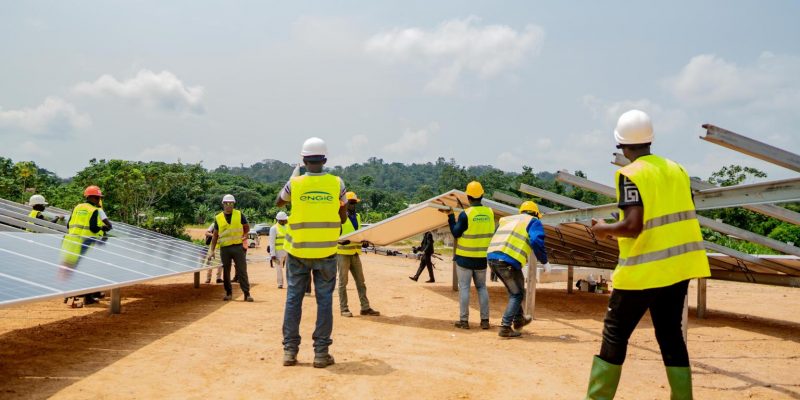 Work has begun on the construction site of the Ndjolé solar-diesel hybrid power plant in Gabon. This project is being developed and financed by the Deposit and Consignment Fund (CDC) of Gabon.

The project to build a hybrid power plant in Ndjolé is now on track. Work has just begun on the project site in the Middle-Ogooué province in western Gabon. The plant is being built by Ausar Energy, a subsidiary of the French group Engie, which is working on behalf of the Gabonese Deposit and Consignment Fund (CDC).

The Ndjolé hybrid power plant will consist of 1,445 solar panels and solar inverters “installed with millimetre precision on the basis of a GPS map on galvanised steel piles”. The entire system will produce 400 kWp of electricity. The solar photovoltaic plant will be supported by a diesel-powered generator.

“The CDC (deposit and consignment fund) owns and finances the plant. It has concluded a lease-purchase contract for the solar power plant with SEEG (the energy and water company of Gabon), which will run and maintain it for a period of 15 years,” explains Edgard Moukoumbi, the CDC’s director of energy. The electricity will be supplied to the transformer station via a 500-metre-long medium-voltage line. The construction site for the new facility will be delivered by March 2020.

The Ndjolé power station is one of a series of hybrid projects that the CDC is carrying out in this Central African country. In all, eight power plants will be built in Gabon. With a capacity of 850 kW, the largest will be built in the city of Bitam. The others will be installed in Makokou, Ovan, Mékambo, Booué (in the Ogooué Ivindo province), Minvoul and Medouneu (in the Woleu Ntem province).

All of these hybrid systems will have a combined capacity of 2.2 MW. According to Engie, the eight mini power plants connected to the grid should save one million litres of fuel oil per year, thus avoiding the emission of 2,600 tonnes of carbon dioxide over the same period. Hybrid power plants will also reduce electricity production costs by 30%. “This technology is a major innovation for Gabon, which is going to develop, for the first time, skills in photovoltaic solar energy. These plants will contribute to the country’s climate plan to reverse Gabon’s energy mix, which until now has consisted mainly of fossil fuels,” says Engie. Implementation of the project will require an investment of 4 billion CFA francs, or more than 6 million euros.