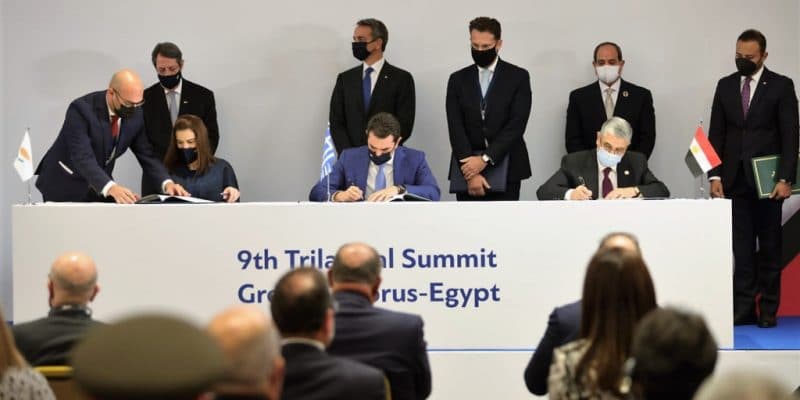 An agreement now exists between Egypt, Greece and Cyprus for the interconnection of their electricity networks. Egypt finds in this cooperation a good opportunity to market its renewable energy in Europe.

That’s it. Egypt signs a trilateral agreement for electricity interconnection with Greece and Cyprus. Two memorandums of cooperation were signed at a joint conference on the side-lines of the ninth tripartite summit between Egypt, Cyprus and Greece held in Athens on Tuesday, October 19th, 2021. For Egypt, this is a way to export some of its electricity at a time when the country is banking on clean energy, including solar and wind to increase its installed capacity and diversify its electricity mix.

According to official figures, Egypt has an installed capacity of 59,063 MW, more than five times the installed capacity of a country like Morocco. In the Egyptian electricity mix, 1,700 MW are of solar origin and 1,465 MW are produced by wind farms. This capacity is set to increase with the implementation of major projects, particularly wind power, in the Gulf of Suez. Cairo’s goal is to produce 42% of its electricity from renewable sources by 2035.

For Greek Prime Minister Kyriakos Mitsotakis, the trilateral cooperation established by Greece, Cyprus and Egypt is a guarantee of stability in the Eastern Mediterranean on issues ranging from energy and tourism to environmental protection and high technology, through trade and navigation. For its part, Egypt wants to interconnect its electricity network with the rest of Europe.

But the necessary infrastructure will be substantial. At least 955 km of submarine cable will be needed to link up with Cyprus. Going north, more than 1,000 km of sea separate Egypt from Greece. A challenge much greater than the interconnection projects already initiated by Egypt and other countries including Sudan, Libya, Jordan, Iraq and recently Saudi Arabia. By mutual agreement, the Egyptian and Saudi authorities recently awarded their power interconnection project to a consortium consisting of the Egyptian company Orascom Construction, SSEM and Hitachi ABB Power Grids, a company based in Zurich, Switzerland.