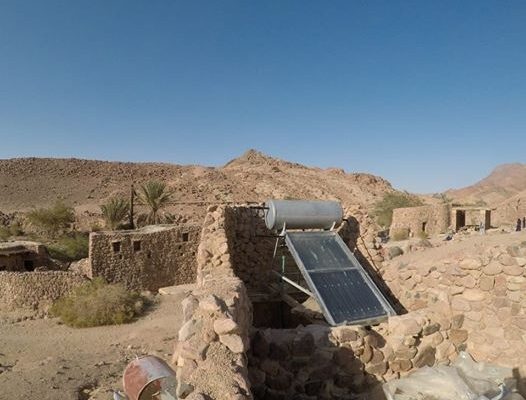 Shamsina, an Egyptian start-up that manufactures solar water heaters for low-income communities, is redesigning its product with the help of the Harvard University Innovation Lab in the United States. This will be the third version of a solar water heater produced by the start-up. It was incubated in the American laboratory in January 2020.

Shamsina improves its offer. After six years of existence, the Egyptian start-up, which specializes in manufacturing solar water heaters for disadvantaged communities, is redesigning its product. Shamsina is supported in its project by the innovation laboratory of Harvard University in the United States. The American laboratory incubated the start-up in January 2020, as part of their BuildIt programme.

Shamsina, created by two Egyptian-American entrepreneurs Deena Mouse and Sara Mousa, is developing a new version of its solar water heater, the third in fact, and hopes that its product will be mass-produced. The start-up also plans to create a scalable company that can serve the millions of Egyptian families who currently lack the means to heat water reliably and safely. “We plan to start production in the spring of 2021. We will produce our models and moulds and entrust production to an existing plant. We’ll be able to produce them at the speed, scale and quality we need,” says Startup Shamsina.

“We will use what we describe as a cross-subsidy model which consists of selling the heaters at a normal price of about $300 (4,840 Egyptian pounds) and also at a reduced price of less than $100 (1,613 Egyptian pounds) for the poorest. Production will be subcontracted to Egyptian factories,” the start-up says.

Like the previous versions, the third version of Shamsina solar water heater will consist of two main units: a water storage unit and a solar panel. The new solar water heater technology will be installed on rooftops or other locations with long periods of direct sunlight. The heat radiation from the sun will pass through stainless steel panels to quickly heat the water. The new prototype’s insulation will allow the water to stay hot longer than the first two Shamsina solar water heaters, which keep the water hot for only two to three hours. The start-up is thus innovating on traditional flat panel heating by making it more compact and better adapted to local infrastructures.

An alternative to the problem of fossil fuel pollution

The idea of setting up the Shamsina start-up was based on an observation. After a field survey, Sara Mousa, the CEO of the start-up noticed that “almost half of Egyptian households do not have access to modern water heaters”. In several unplanned areas of Cairo, the CEO also found out that “families use kerosene lamps, gas tanks and fireplaces on a daily basis to heat water to meet their basic needs such as bathing, cooking and cleaning. These are alternatives, of course, but they are very dangerous because of their negative impact on the health of the population (respiratory diseases). Kerosene, gas and fires are fossil fuels. They therefore emit carbon dioxide, a greenhouse gas.

The first version of the Shamsina heater was installed in 25 homes and organisations in eight governorates of Egypt. Subsequent prototypes with a capacity of 0.1 m³ each were built and sold for about $210 (3385 Egyptian pounds) to local families throughout Egypt. To implement this project, the start-up received support from numerous companies and organisations including Yomken, Nebny, Ruwwad and Hand Over. With the launch of Shamsina’s new version of solar water heaters, several other households will also see a change in their lifestyle.

Start-up Shamsina has received funding from Davis Projects for Peace, an initiative for all students at Davis United World College Scholars Programme schools in the United States and the American non-profit organization Synergos. The start-up is currently seeking seed funding of approximately $50,000 (806,340 Egyptian pounds).