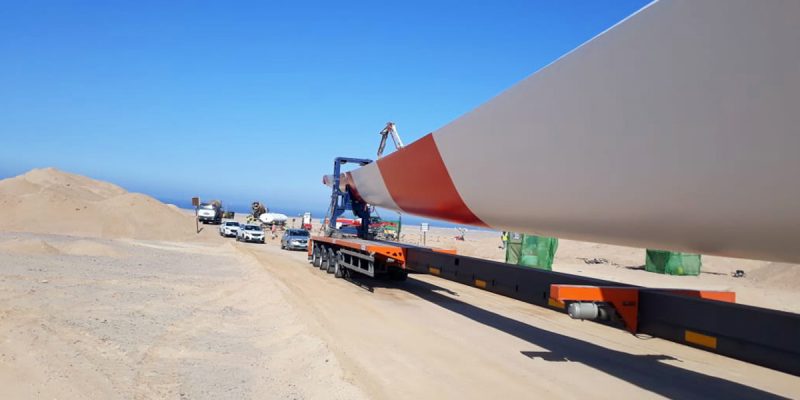 The construction site of the West Bakr wind farm in the North-East of Egypt will soon begin to reach cruising speed. On October 21st, 2020 the wind turbine manufacturer Siemens Gamesa Renewable Energy SA started the delivery of the wind turbine blades to the project site. These will be mounted on the 96 turbines for a production capacity of 250 megawatts (MW).

There is growing certainty that the West Bakr wind farm, located 30 km north-east of Ras Ghareb in Egypt, in the Gulf of Suez, will be delivered on time. The project could indeed be delivered by the end of 2021. For eight months after the ground-breaking ceremony, the laying of the first wind turbine fins on the site has begun. This operation was launched on October 21st, 2020 by wind turbine manufacturer Siemens Gamesa Renewable Energy SA, which is also responsible for the construction of the wind farm under an engineering, procurement and construction (EPC) contract with the project developer, Lekela Power.

The wind turbine blades will be mounted on a total of 96 SG 2.6-114 turbine units. Once completed and connected to the grid, the 250 MW West Bakr wind farm will increase Egypt’s wind power capacity by 18%. An increase in power capacity to meet the consumption needs of more than 350,000 households in an affordable and sustainable manner.

The West Bakr wind project is entirely financed by Lekela, to the tune of $252 million. The Africa-focused renewable energy company has raised this amount from several investors. These include the International Finance Corporation (IFC), the corporate finance arm of the World Bank, the European Bank for Reconstruction and Development (EBRD) and the US International Development Finance Corporation (DFC), the former Overseas Private Investment Corporation (OPIC), which merged in December 2019 with the Development Credit Authority (DCA). The loans will be repaid through the sale of electricity generated by the plant. An activity carried out within the framework of the 20-year Power Purchase Agreement (PPA), which Lekela has signed with the Egyptian public power transmission company (EETC).