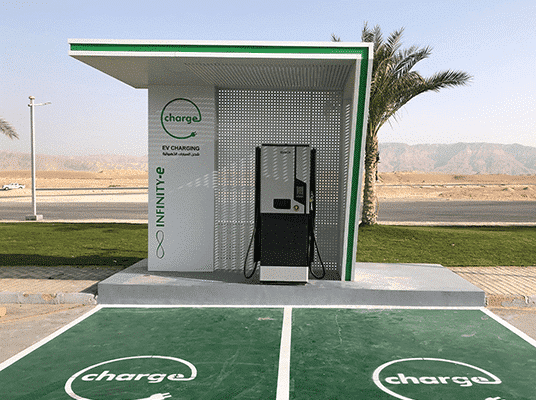 Infinity-E, the subsidiary of the Egyptian company Infinity Solar, plans to invest more than 19 million dollars to deploy its charging stations for electric vehicles in Egypt. This investment plan is being announced at a time when the Egyptian government is encouraging individuals to adopt electric mobility.

Infinity-E supports the Egyptian government’s policy in favour of electric mobility. The subsidiary of the solar energy provider Infinity Solar plans to invest 300 million Egyptian pounds (more than 19 million dollars) for the deployment of 300 charging stations for electric vehicles throughout Egypt.

For the year 2021, the company will invest 120 million Egyptian pounds (more than 7.6 million dollars) for the construction of 100 recharging stations in several Egyptian cities. According to Shams El Din Abdel Ghaffar, Infinity Solar’s general manager of the electric car sector, these recharging stations will be equipped by EVBox, a company based in Amsterdam in the Netherlands. These stations will be able to charge between two and six electric vehicles simultaneously.

At least 150 charging stations in service

Will Infinity-E produce the electricity needed to recharge electric cars from solar photovoltaic systems? Nothing is less certain. But its parent company, Infinity Solar, is supplying solar power to Egypt’s national grid from the Benban solar complex. However, Infinity Solar already has the funds to carry out its project, with the European Bank for Reconstruction and Development (EBRD) announcing a $60m equity stake in the company in 2019.

The purpose of the investment is to finance the development, construction and operation of renewable energy projects and related ancillary activities, including electricity distribution and the creation of recharging stations for electric vehicles in Egypt and the Southern and Eastern Mediterranean countries (Semed).

Infinity-E already has 150 terminals in 40 charging stations in Egypt. This investment is in line with the Egyptian government’s policy in favour of electric mobility. In the framework of this strategy, the military complex has validated the proposal of a consortium of companies aiming at replacing tuk-tuks by electric vehicles. These investors plan to build up to 1,000 recharging stations for electric vehicles across Egypt.