EGYPT: Berlin obtains guarantees for the import of green hydrogen 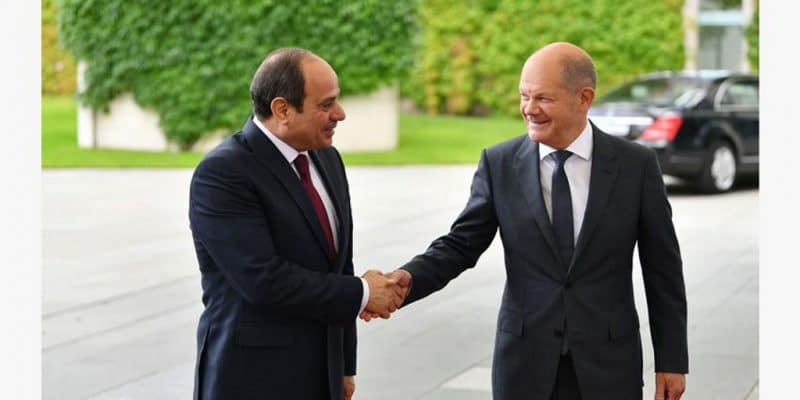 Egypt and Germany are strengthening their energy cooperation. Berlin has embarked on a policy of diversifying its energy supply sources and wants to import green hydrogen produced in Egypt's Suez Canal Economic Zone.

Egypt is set to become the leading producer of green hydrogen in Africa. And Germany wants to use this new energy to reduce its energy dependence on Russia. On the sidelines of the 13th Petersberg Climate Dialogue in Berlin, Germany, Egyptian President Abdel Fattah al-Sissi met with German Chancellor Olaf Scholz to discuss green hydrogen.

During the joint press conference that followed the exchange between the two leaders, the German chancellor made known his country’s ambition to free itself from Russian gas by relying on other energies, notably green hydrogen, for which Egypt has great potential. “For the transformation of industry in countries like Germany, electricity and hydrogen will be crucial,” said Olaf Scholz.

Egypt has an installed electricity capacity of 57,000 MW, and the government intends to increase this by focusing on renewable energies, especially wind and solar. The North African country is also implementing an energy policy that is attracting many private investors. It is in this context that the Egyptian authorities have taken the lead over other neighbouring countries by signing agreements with large groups for the development of the production and trade of green hydrogen and its derivatives.

Read also- EGYPT: these major groups that will invest $10 billion in green hydrogen by 2030

This is the case of the German company H2-Industries which has obtained the approval of the Egyptian government for the construction of a hydrogen production plant from waste in the East Port-Saïd industrial zone. The aim is to produce and export 300,000 tonnes of hydrogen per year by destroying 4 million tonnes of non-recyclable organic and plastic waste over the same period.

For its part, the energy giant Siemens has obtained the approval of the Egyptian authorities to build installations with an electrolysis capacity (hydrogen production process, editor’s note) of between 100 and 200 MW. This will be in the framework of a partnership with the Egyptian Electricity Holding Company (EEHC).