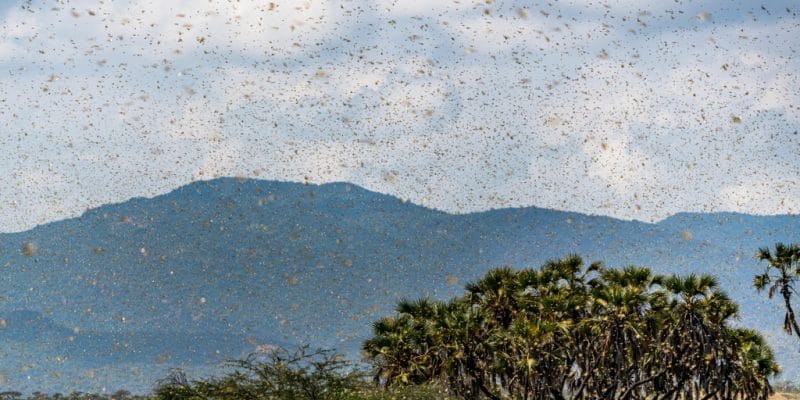 Locust swarms have been devastating crops and protected areas in East Africa for several weeks. According to the United Nations Environment Programme (UNEP), the current invasion is the latest symptom of a series of extreme climate variations in East Africa in recent years.

East Africa has been hit by a locust invasion on an unprecedented scale for several decades. In Somalia and Ethiopia, about 70,000 hectares of agricultural land have already been destroyed. Meanwhile, in Kenya, swarms up to 60 kilometres long and 40 kilometres wide have been observed, causing significant damage to agricultural production. According to the Food and Agriculture Organization of the United Nations (FAO), locusts can eat the equivalent of the food consumed by 80 million people in a single day.

West Africa is not threatened, but the situation is such that governments in surrounding countries are also afraid of the consequences and are trying to take measures to deal with them. In Burundi, the Minister of Agriculture and Livestock held a press conference on February 4, 2020, to present the strategic axes of his action plan to the populations.

The authorities set up an inter-ministerial monitoring committee and a commission in charge of technical monitoring. Also as part of the response, a campaign to raise awareness among the population on the collection and consumption of locusts was launched. This would reduce the number of locusts to preserve crops in case of attack.

However, these measures are unlikely to be very effective in the face of a phenomenon that experts attribute to climate change on an exceptional scale.

A situation caused by climate change

East Africa is one of the areas most affected by climate change. According to specialists, it is caused by an ocean-atmosphere interaction phenomenon called the “Indian Ocean Dipole“. The climate phenomenon is created by the difference in sea surface temperature between the eastern and western zones of the Indian Ocean. According to scientists, a dipole of such intensity has not been observed for years or even decades.

This climate disruption has created ideal conditions for insect reproduction. During periods of calm – known as recessionary periods – locusts are generally restricted to the semi-arid and arid deserts of Africa, the Near East and South-West Asia, which receive less than 200 mm of rain per year.

According to Richard Munang, a United Nations Environment Programme expert on climate and Africa, “The last five years have been the hottest since the Industrial Revolution. Studies have linked a warmer climate to more threatening locust swarms. Wet weather also encourages locusts to multiply”. He also noted that “widespread and above-average rains – up to 400% above normal – hit the Horn of Africa from October to December 2019”. These abnormal rains were caused by the Indian Ocean dipole, a phenomenon accentuated by climate change.

Kenya is betting on pesticide spraying.

Kenya is plagued by locust invasion since late December 2019. The Kenyan government now fears that the threat is spreading to grazing areas. A possibility that would be devastating for pastoralists. And if the locust threat has not been contained by the start of the next planting season, around March, farmers could see their fields destroyed.

To reinforce control, the country has therefore called on private companies, such as Farmland Aviation, which specialises in fertiliser spraying. Kenya now has five aircraft that spray pesticides on locusts. Even if, as Richard Munang reminds us, “the impact of these chemicals on the environment and other ecosystems essential to food security cannot be neglected. For example, bees and other insects pollinate up to 70 percent of our food. Not to mention the direct impact of pesticides on human health”. If nothing is done, the number of insect pests “could be multiplied by 500 by the month of June,” said Friday Guleid Artan, from the Climate Prediction and Applications Centre (ICPAC), part of the Intergovernmental Authority on Development, quoted by the magazine Science et Avenir.